Everyone, make room for drama.

We’ve reported on the film Sauvage (English title: Sauvage/Wild) since it debuted at the Cannes Film Festival last year, inspiring a few cinema patrons to walk out in disgust.

The story of a gay male meth-addicted hustler living in France, Sauvage sparked debate over its near-pornographic content and totally non-judgmental take on street life. And it’s true: It does come dangerously close to pornography, and we mean dangerous in the good kind of way.

Despite the walkouts–or perhaps, in part, because of them–the film nabbed a nomination for the Palm D’Or (the highest prize of the festival) and scored the Rising Star award.

Now 48, Camille Vidal-Naquet studied literature before acquiescing to academia, teaching film studies. In addition to charity social work, he’s long worked in experimental film, directing shorts. Sauvage/Wild, which he wrote and directed, marks his feature film debut. The film will premiere theatrically in New York City on April 10, with a nationwide roll-out in theatres and streaming services to follow.

Just ahead of the North American opening, Queerty scored a few minutes with the soft-spoken Vidal-Naquet to discuss his incredible film, its reception, and his ambitions as an artist.

What made you want to make a character study?

Well actually, you exactly said it. It’s a character study, meaning I didn’t start from the subject of male street hustling. It was just a character. And you have to know that this character, his energy, came from a character I developed for my short movies. It’s always the same character who is a young man, in his 20s, and he’s alone and trying to find love in a brutal world. So I started with this and I wanted to go further. It all came naturally to me. I wanted to explore this kind of character who is an outcast, who is different, and who doesn’t own anything. It was very important that he not have belongings. He doesn’t own anything.

You know a lot of people have been asking me, “Why doesn’t he have a phone?” But I say, “Is that what should come to mind?” When you look at homeless people, do you often see homeless people with a smartphone? It never happens, basically. When you’re on the streets, there are necessities, and the phone isn’t one of them. So that’s where it comes from—this energy. And I wanted a very minimalistic script with regular patterns: going to a doctor, walking in the street, going to see a client, going to a doctor. It was like this. But in the beginning, it was this energy that led me to the world of homeless people. 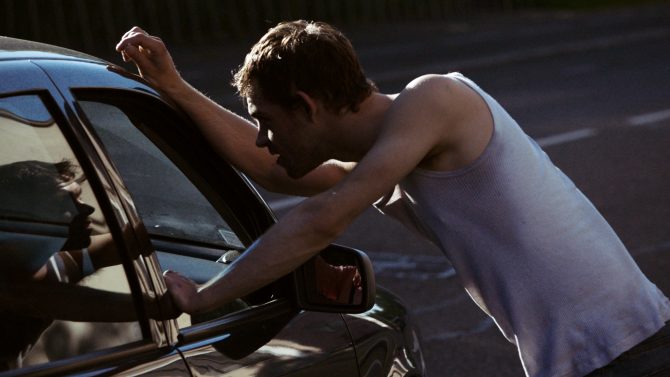 So what kind of research did you need to do in preparation? Did you meet with actual street hustlers?

Yeah, many. The process—some start with the research, and then they write the script. I did the opposite. I like to write when I don’t know anything about a subject because I think the imagination is limitless. You can do whatever you want, and it shows what you want to talk about and the energy you want. If you start looking at the reality, it’s going to be limiting. And I need to be there, but later. So I made everything up. It was violent, it was brutal, but I was moved by the character. I think that’s the most important thing. I knew they had this place of prostitution in Paris: the Bois de Boulogne. So I followed them the first night doing roams in a little van. You open the door and propose a little coffee, and just talked to the guys. I ended up spending years there.

I just forgot about the script. It was because I met people. I met these guys and we started bonding and I wanted to see them every week. I wanted to know what was happening to them. And how can I say this: I felt so small there.

We live our lives, and we always think we know everything. But these guys were just so strong, so solid, so brave. I told the producer, “I need a few weeks to work.” And after two and a half years he called me and said, “I think we should do the film now, don’t you think?”

And I said: “Yeah, you’re right.” But it was difficult because I had to think about it. I thought it was important that all these emotions these guys gave me would be in the film forever. And that’s how it went.

The film doesn’t explore Leo’s life prior to his becoming a hooker. When we meet him, he’s been on the streets for years. What made you decide to not provide him any backstory?

The idea was to try at all costs to avoid passing any judgment on his life. It was not a social study. It was not a film about trying to understand the mechanism of prostitution. It’s very interesting: there are tons of essays on this question. But I think you need someone more professional, someone whose job it is to analyze this kind of thing. And I don’t know about it. It’s not my world. I couldn’t explain why someone goes into prostitution. But more importantly, the film invites you to live a few moments with a character so you share his life. You don’t judge his life, you live it with him. And if you think about it, as soon as you learn about his backstory, you begin to pass judgment.

You begin to say “yes, he was included in our social rules. And there was a time when he quit them.” So it’s judging because you’re going to think there are normal rules, and not normal rules. To me, the question was not normal or not, it was just the life of somebody. It’s not my responsibility to say if it’s good or bad, but to invite the audience to share these moments with him. When you think about it, you follow the point of view of the character. He doesn’t know what he did the day before. He doesn’t know what he’s going to do in the next hour. So when you watch the film, you’re in exactly the same state of mind as the character. So this is why, from the beginning, there was no backstory in the script. 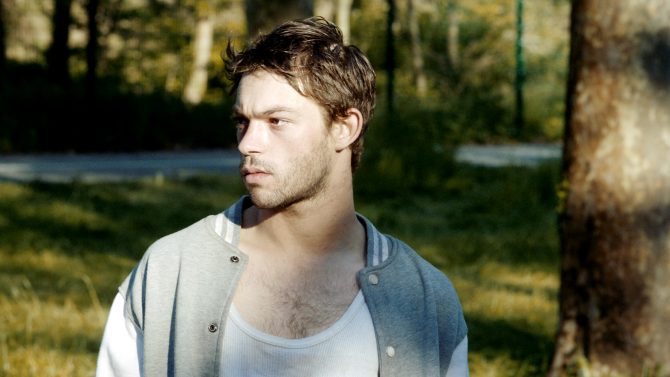 Leo falls for his friend Ahd, who is cruel and physically violent at times, and who insists he’s straight, even though he prostitutes himself to men. Throughout the film, Leo is humiliated and tortured and doesn’t seem to care much about money. Given his profession do you think of Leo as a masochist?

If you call him a masochist, you’re judging his life. And I think you have every right to. That’s one thing very interesting in the film: it’s how you see it. You see the film with your point of view, which is absolutely normal. In the film, apart from one scene where he really suffers where he’s with a dangerous client who really tortures and humiliates him, he never complains about being a prostitute. He never complains about living in the street, ever. So he’s comfortable with this situation. He’s not a masochist, in that a masochist is someone who enjoys something that is bad. I think some in the audience think he’s a masochist because they are projecting their moral judgment onto the film. And I repeat, it’s really normal.

I understand, totally. We have our point of view. But the film tries to change your point of view by saying not to judge if it’s good or bad. Just imagine some lives are completely different than our lives. It’s just different. I love the scene in the film where the female doctor says, “I could help you quit drugs.” And I love that he answers “why?” He’s honestly answering that. He’s not trying to be a rebel, he’s just saying “give me a reason why.” And she’s not capable of giving any argument. Humans are so complex, that there’s no simple answer to complex situations. I just want us to share a few days with this character. 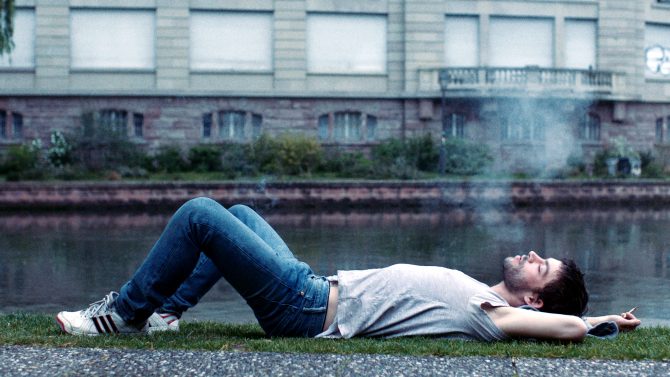 I’m glad you mention the scene with the doctor. She’s also the only female character in the film, which is interesting. That’s the most touching scene in the movie. It moved me to weep. When he spontaneously embraces her, it’s so affecting. It raises so many questions about Leo’s character. He doesn’t complain about being a hustler, but he doesn’t seem happy either. So for you as an artist, is he someone that craves love? Does he crave attention? Who is he?

Oh no, they’re giving me a sign to wrap up…

Ok, one last question then. Your film was very contested when it screened at Cannes. I heard there were walkouts, though it was also nominated and won some major awards there. How does that polarized reaction affect you? Especially because this is your first film…

Not to mention some extremely sexually graphic scenes…

Yes, right! So I can understand people would leave the theatre if they feel uncomfortable. And if they have to, that’s no problem at all. It doesn’t affect me at all. What would affect me is the whole room leaving. But a few people leaving–I hope they are not too shaken. That’s not what I wanted. I hope they can understand the film. But it doesn’t shock me at all. The reception to the film in general was so warm. People were so touched. I feel so blessed. But I think some people know this film is not for them, and again, I understand. Totally. But as an artist, I felt really, really free to do the film. And I couldn’t be happier. Even the questions they ask, even critics, even if they disagree…I think that’s one of the interesting things about the film. Some people disagree. If they are shocked, I wasn’t trying to shock. I was trying to be honest and portray the real, high danger of what these guys live.

But I’m perfectly alright. I’m never offended by anything.

Sauvage/Wild opens theatrically in New York City April 10. A nationwide roll-out on streaming and in select cinemas will follow.