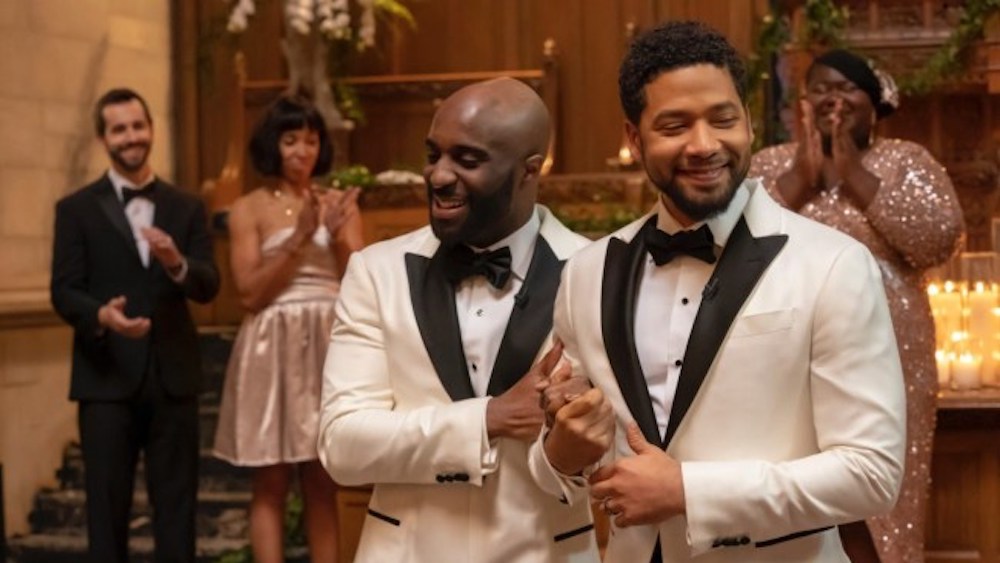 On last night’s episode of Empire, Jussie Smollett’s character Jamal Lyons married his fiancé Kai in what has been called the “first wedding of a black, gay couple during primetime on a major broadcast network.” However, the episode could be Smollett’s last as the show’s director and cast butt heads over whether Smollett should appear in season 6 of Fox’s dramatic musical series.

Empire‘s creator, openly gay director Lee Daniels, recently said that drama surrounding Smollett’s alleged January 29 hate attack in Chicago is “causing a dilemma.” He added, “We are in discussions about [whether to re-hire Smollett] right now.”

When asked whether he believed Smollet, Lee replied, “There are only two judges: God and that man that wears the robe. And I cannot judge. I can only have compassion. If he is guilty, then I am worried about his mental health.”

Related: 5 actors who could replace Jussie Smollett on ‘Empire’

According to Entertainment Weekly, the show’s main cast, including Terrence Howard, Taraji P Henson, Bryshere Y. Gray, Trai Byers, Gabourey Sidibe, and Nicole Ari Parker “sent a letter to Fox and the Empire creative team asking for Smollett to be brought back for the yet-to-be-ordered sixth season.”

We understand the past months have been difficult to process—sometimes the headlines brought more confusion than clarity, yet we now have a conclusion to this ordeal. Throughout Empire’s five seasons working with Jussie and watching how he has conducted himself throughout this traumatic event, we have come to know not just the character Jussie portrays, but also truly come to know Jussie’s personal character. He is kind. He is compassionate. He is honest and above all he is filled with integrity. He is also innocent and no longer subject to legal uncertainty with the criminal charges against him having been dropped. We are confident in his lawyer’s assurance that the case was dismissed because it would not have prevailed….

It is why now, more than ever, we must stand together as a family. A family is there for us in good times and bad. It can cut through the noise and confusion to understand that there is a person in the center of all this who deserves nothing more than to move forward with his life. We understand that this show is a business. And that business matters to us as well. We are confident our fans will welcome our “Jamal” back into the Empire family as enthusiastically as we will.

That is why we write today to ask you to keep Jussie on the cast so that we can all put this behind us and move forward.

Smollett was written out of this season’s two final episodes after Chicago police charged him with faking a hate crime against himself. Soon after, the show’s ratings plummeted.

Smollett pled “not guilty” and all the charges were later dropped. Chicago police have since sued Smollett for the $130,000 it invested looking into his alleged attack, and Smollett has reportedly been suffering night terrors due to stress over the whole ordeal.