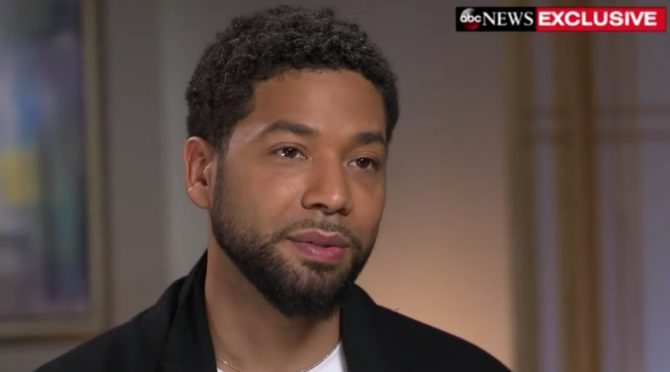 Embattled Empire actor Jussie Smollett appeared at the Leighton Criminal Courthouse in Chicago earlier this morning where, as expected, he entered a “not guilty” plea to all 16 felony counts of disorderly conduct against him.

After Smollett pleaded not guilty, Cook County Judge Steven Watkins granted him permission to travel to New York and California to consult with his attorneys, if he provides 48 hours notice to the court’s pretrial services office. Smollett is free on bail, and Watkins admonished the actor to be present an on-time for all of his upcoming court dates.

Meanwhile, Smollett’s lawyer Mark Geragos has been on the media circuit proclaiming his client’s innocence. Last week, he told Anderson Cooper, without any sense of irony, that the actor is a victim of a “media gang bang.”

“What is happening here is, frankly, a media gang bang of this guy of unprecedented proportions,” Geragos said.

“This is an outrage,” he continued. “I defy anybody to find any indictment anywhere where somebody has brought 16 counts for being a victim of a hate crime, basically.”

The producers of Empire have already deleted Smollett’s scenes from the remainder of the season, and rumors abound that his role will be recast. Should a jury convict him, the actor will also face lengthy jail time for his crime.

Smollett’s next court hearing is scheduled for April 17.

Related: Forget the hate crime, Jussie Smollett’s lawyer now says the actor is the victim of a “gang bang”