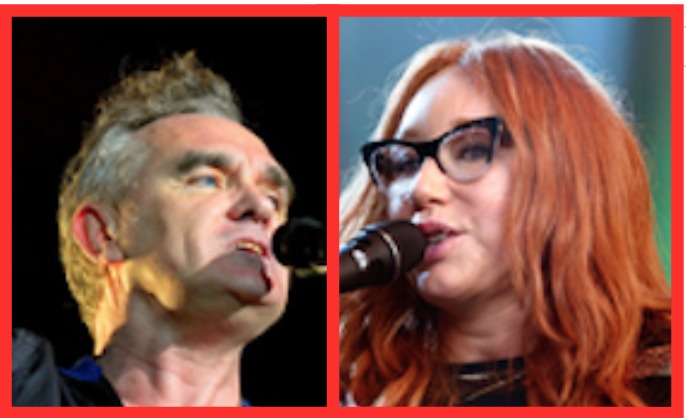 Imagine, if you will, an abrupt backstage sparring session between Morrissey and Tori Amos.

Frankly, we think things would get gritty.

In the following Pitchfork clip, Amos alludes to one such altercation which apparently occurred back stage, leading Morrissey and Amos to rub each other very much the wrong way.

What to make of this?

For more details, we direct you to this 2005 thread from Morrissey-Solo.

Amos has apparently discussed this incident before at one of her shows:

Tori Amos had some strong words about Morrissey last night at her Manchester show. On this tour she’s been doing a pair of covers each night, requested by fans on her website. Usually they have a local theme, so many people had evidently requested a Moz song for Manchester.

She said she would play a song by a local act, but that it wasn’t Morrissey, which elicited some sighs from the audience. She said she had good reason not to, but didn’t want to be drawn into it. One fan asked her why she didn’t like him so eventually she told us: she’d bumped into him once at a TV or radio show or something, and greeted him with “Hey man, great songs!”, to which Moz apparently responded with “Like you would know?”

“This is what she said:

‘… and it’s not The Smiths. Piss off… It’s not Morrissey because he pissed me off. I’ll tell you why. (audience: He’s a fuckhead!) That’s right. Let me tell you why… fuck off! Great band… I can’t believe I’m having this conversation with you people. I’m coming out of a tv show, right, it’s forever ago, and he’s walking past me, this little short guy, and I’m walking past and I have heels on, so I can say that. And I look back and I just said, ‘Hey man, you’ve written great songs.’ He said, ‘What the fuck do you know?’

What the fuck do I know, motherfucker, who are you trying to sell records to in america you small-dick motherfucker? We never spoke again. So I’m not doing his song. But I like the band and I listen to the songs, but this is somebody else…”

She said it with humor, btw.”

So there you go.

This begs the question: Had Pitchfork editors possibly heard this story before, and deliberately baited Amos in the hopes of getting more lurid details?