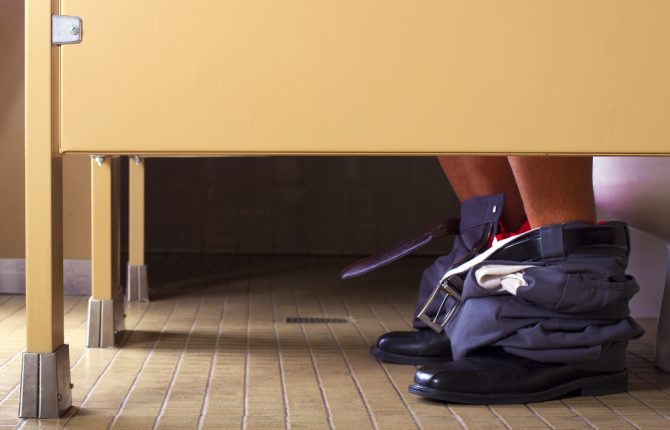 A former police clerk stands accused of secretly filming close to 70 of his male colleagues using the bathroom, authorities say.

The invasion of privacy occurred, of all places, in the headquarters of the Long Beach Police Department.

KCAL reports that the ex-employee by the name of Sergio Nieto was arrested with roughly 115 recordings in his possession.

He’s been charged with 115 misdemeanor counts of invasion of privacy, and the formal complaint lists 69 victims.

According to the complaint, the cellphone videos Nieto took over a three-month period show men changing their clothes and using the facilities.

As a police clerk, Nieto regularly reviewed accidentally-filmed police body cam footage, taken in places like bathrooms. Several of the men Nieto filmed chose not to be part of the case against him, likely because there were already so many victims willing to come forward.

Some of the victims reportedly include very high-ranking members of the Long Beach Police Department, which can’t mean anything good for Nieto in terms of how the case is prosecuted and sentenced.

The behavior came to light after one of Nieto’s co-workers witnessed what they reported to be Nieto behaving suspiciously in the restroom.