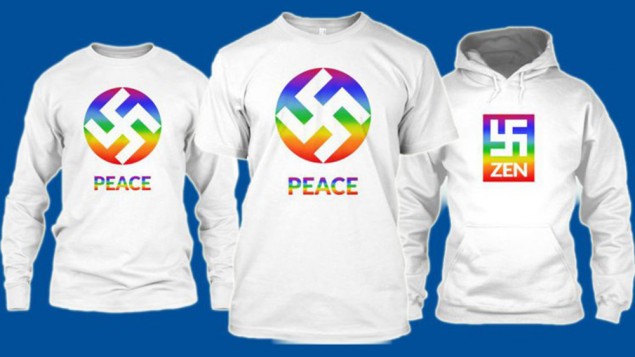 An online clothing company is under fire for creating rainbow swastika shirts in an effort to promote LGBTQ inclusivity… because never was there a greater advocate for tolerance and acceptance than Adolf Hitler.

KA design unveiled the new shirts on Teespring. They feature rainbow swastikas with the words “peace,” “zen,” and “love.” In the description, the company said that they were “reclaiming” the symbol to represent LGBTQ people.

“They stigmatized the swastika. They won. They limited our freedom. Or maybe not? The swastika is coming back together with love, peace, respect and freedom,” the description read.

Not surprisingly, people weren’t so into the idea:

.@teespring You will not escape from the fact that swastika was turned by Nazis into a symbol of racism, hate, antisemitism & mass murder. https://t.co/uejBq5XP2S

WTF are those even supposed to mean? Swastika + rainbow + peace? I'm more bewildered than outraged. Who & what are they supporting?

Hey @teespring how do you guys like forever being associated with Nazis and Jew-hatred? Great marketing job! #IrredeemableSwastika @Ostrov_A

who the fuck looks at that and thinks "ahh yes reclaiming the swastika" rather the "look a gay nazi"???

A spokesperson for Teespring said that they hoped to “share the beauty” of the swastika:

“We really like the symbol in its shape and aesthetics, and we would love to share the beauty of this symbol detached from the hatred associated with it.”

The shirts have since been removed from the site.

Related: These t-shirts helped change history. It’s time to break them out of your closet again