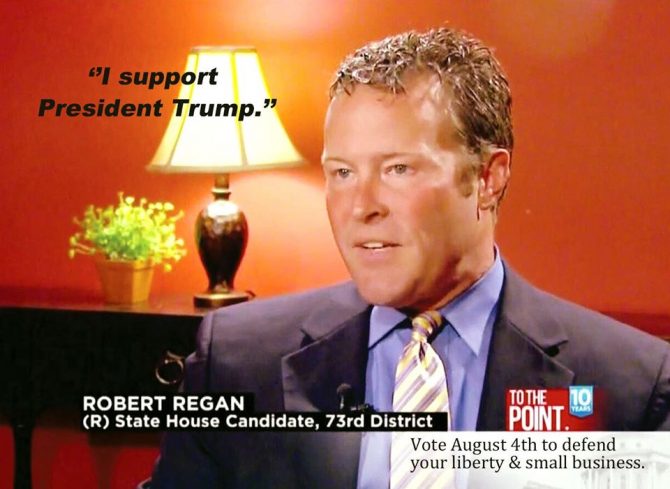 The daughter of a conservative candidate running for a seat in the Michigan state House is urging everyone please, for the love of god, do not to vote for her father.

Stephanie Regan is the daughter of Republican state House candidate Robert Regan, a pro Trump Republican who doesn’t believe in climate change, wants to make English the “official language” of the United States, and describes himself as so conservative he “makes Rush Limbaugh look like a liberal.”

On Tuesday, she tweeted: “if you’re in michigan and 18+ pls for the love of god do not vote for my dad for state rep. tell everyone.”

if you’re in michigan and 18+ pls for the love of god do not vote for my dad for state rep. tell everyone

thank u for this

You’re doing what I wish all of the Trump children would’ve done 4 years ago. Thank you for your service

Obviously she knows something that the general public doesn’t for her to come out this strong PAY ATTENTION!!

I looked him up and just the “Where I stand in the issues” page on his own website is fucking terrifying. We cannot allow men with these views into our government.

Robert Regan responded to his daughter’s anti-endorsement in a passive-aggressive statement posted to Facebook yesterday, writing: “I am happy that she feels confident enough in our relationship to express her opposing thoughts so publicly.”

Speaking to local media, he blamed Stephanie’s college for indoctrinating her with radical “Marxist” ideas.

“When they go off to college, quite frankly they get involved with these Marxist, socialist universities, and they start getting indoctrinated with things that are completely polar opposite from where you raised them,” he said, adding that he and his daughter do not see eye to eye on systemic racism, white privilege, and Black Lives Matter.

After her tweet went viral, Stephanie Regan posted another one thanking everyone for their support.

“ty everyone offering support and love! my dms and notifs are crazy it’s hard to reply but pls know i appreciate u!!!!” she wrote.

ty everyone offering support and love! my dms and notifs are crazy it’s hard to reply but pls know i appreciate u!!!! i didn’t think anyone past hometown friends would see this but this is more than political beliefs!! ppl see a familiar name & vote. READ. GOOGLE.