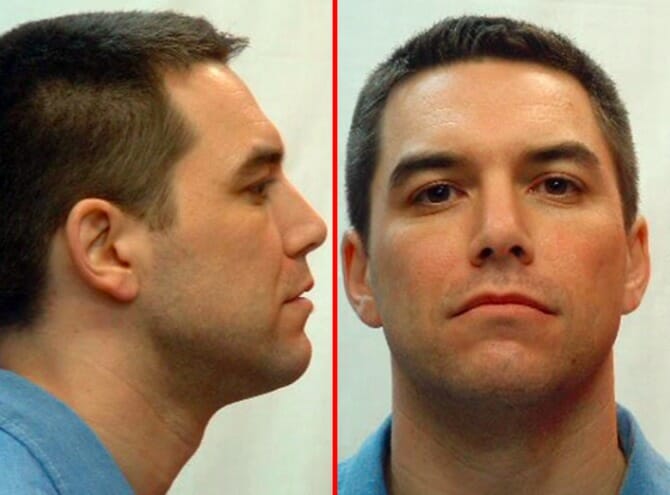 Radar Online is back at it again, publishing more outrageously homophobic and salacious “reports” about celebrities and other public figures. This time it’s concerning convicted killer Scott Peterson.

“Caged killer Scott Peterson has morphed into the prison ‘Snowbunny’ behind bars,” the article begins, “exchanging sexual favors with a group of burly inmates for protection.”

Peterson is currently on death row in San Quentin State Prison in California after being convicted in 2004 of killing his pregnant wife, Laci Peterson, and their unborn child.

Radar claims to have gotten the information from another death row inmate, Raynard Cummings, who says the 45-year-old murderer regularly performs sex acts on him and others in the shower and exercise yard in exchange for protection since being removed from protective custody.

In an 18-page letter, 61-year-old Cummings alleges Peterson also hand washes his underpants and gives him “oily back rubs.”

“Taking SP [Scott Peterson] in was and is one of the sweetest move[s] I’ve ever made in 37 years of death row imprisonment,” the letter reads.

It continues: “For whatever reasons, SP wanted to hang out with the badest [sic] of the blackness… I call him my Death Row sissy because he’ll do just about anything to save his worthless neck. He knows he’s one of the most hated men in here.”

But this is hardly the first time Radar has ventured into homophobic territory with it’s “reporting.”

And in 2016, it ran a fictitious homophobic story “outing” Will Smith for paying hush money to cover up a gay affair he had with his longtime friend Duane Martin.