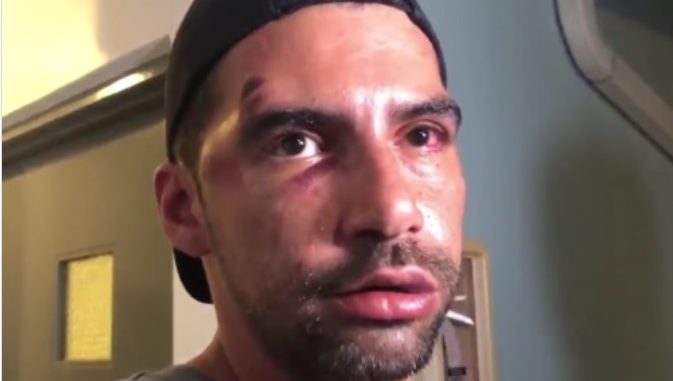 Rene Chalarca and his boyfriend Dimitri Lugonov were walking out of the restroom in Lumus Park at around 7:45 pm on Sunday when four men approached and violently attacked them.

“They start to hit us, like beating us, hard,” Charlarca tells his local news station.

“It was, like, instant. I got hit, and they knocked me out,” adds Logunov. “I was on the ground, they started beating me up.”

To add insult to injury, one of them shouted a homophobic slur in Spanish.

When the couple tried to flee, the gang of men chased after them. CCTV caught the horrifying attack on video.

Police are considering the attack felony battery for now but say they are investigating it as a possible hate crime.

“For me, the way we were dressed and everything and we were together, it was like, ‘Yes, it was a hate crime,’” Chalarca says. “We probably provoked them because we were walking together, holding hands. It was gay pride, South Beach was full of gay people.”

Helmut Muller Estrada, who witnessed the assault, tells the Miami Herald that he tried to stop the attack, but one of the assailants knocked him out, smacking his head on the concrete. The fall left Muller with a gash across the back of his head that required four stitches.

“It doesn’t matter if you’re gay or straight,” Estrada says, “we all should respect each other.”

So far, no arrests have been made.