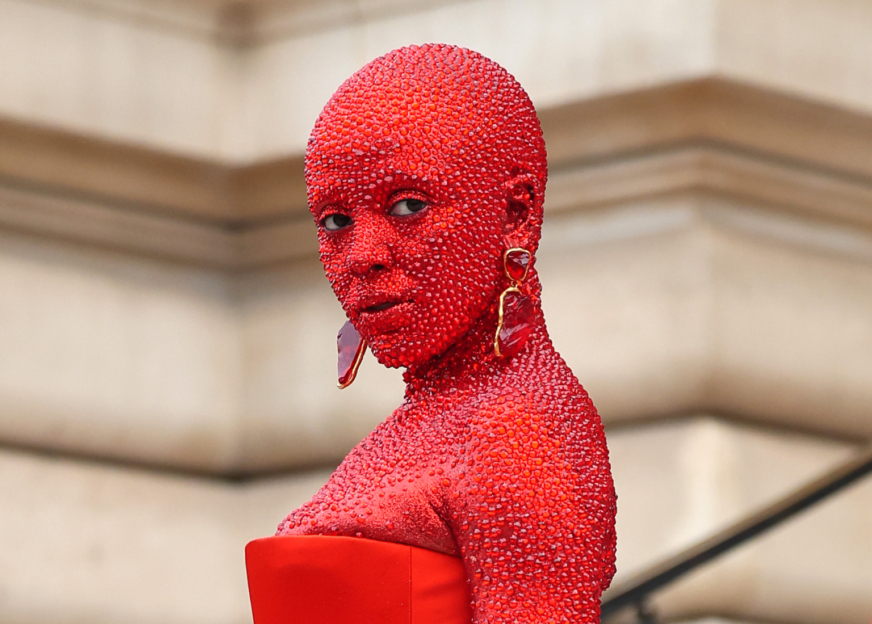 The 27-year-old Woman singer made heads explode arriving at the Schiaparelli Haute Couture Spring/Summer 2023 fashion show covered in head-to-toe red paint and dripping in 30,000 Swarovski crystals across her face and body. Mystique from X-Men is shook!

While the ensemble featured a silk bustier, beaded skirt, and matching boots, Doja’s blood red Avatar look also served up nightmare flashbacks to Carrie and Hellraiser with a little early Lady Gaga energy thrown in for good measure. Put ya paws up!

The horror-inspired getup was right on point as the show’s theme was “Inferno Couture,” based on Dante’s Inferno and the nine circles of hell.

Renowned makeup artist Pat McGrath helped create the look which required the 30,000 crystals to be applied by hand over the course of nearly five hours.

As expected with any bold fashion choice, fans were fiercely divided:

Icon, she is so daring with fashion, love that

This is so disturbing and devilish pic.twitter.com/stwEGAV6IN

This made me love her so much more. Like this is dope Artist expression.

me following the trail of red swarovski crystals to find doja cat pic.twitter.com/sK5GLJ2YaE

Stylist: What you want?

Doja: you ever seen true blood?

Someone who may not have been quite as enamored with Doja’s scene-stealing high-fashion costume was Kylie Jenner, who thought she’d be the belle of the paparazzi ball by affixing a beheaded lion to her strapless dress. Roadkill is the new black!

While the reality star’s Mufasa accessory definitely stood out, it paled in comparison to Doja’s fully immersive fright fest eleganza. A video of the two meeting up on the show’s red carpet went viral for capturing the awkwardness of the moment.

kylie def thought she was gonna be thee look at the show….and then doja walked in pic.twitter.com/6lYxPp1Wye

In the clip, Kylie and Doja exchange the bare minimum of pleasantries as they utter “good to see you” and retreat to opposite sides of the event.

The uncomfortable situation seemed to escalate as the two fashionistas sat in the same row and did their damndest to not acknowledge the other despite both being trapped in their cumbersome and eye-catching garb. Look over there!

The way doja ignore her while she was busy talking shot with kylie jenner is kinda the best moment,, btw Doja cat is all red is 🔥,, pic.twitter.com/ctK5HmGjtf

Whether you are Team Doja or Team Kylie, everyone can agree the scene was straight out of the Hunger Games. May the odds be ever in their favor!