However, it seems his behavior has not gone down well with everyone.

Shaun continues to post videos of himself doing workouts and generally “shaking his ass”. This sometimes includes goofing around with his hubby or the occasional butt shot to show off the glutes he’s worked so hard upon. Some have made it known they think he should act that way around his kids, prompting a blunt response on his official Instagram and its 1.2million followers. 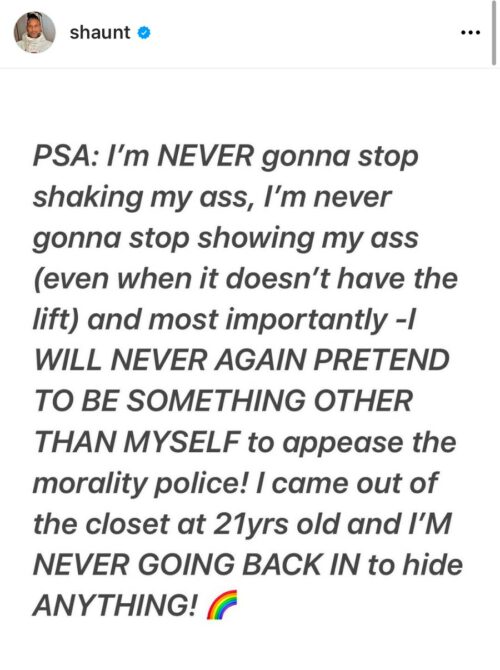 Related: If you call fitness guru Shaun T a bottom, prepare to be corrected

He posted a caption alongside the statement saying, “I even increased the font size so there aren’t any misunderstandings! ✌🏽I’m not doing it with the people who are morally perfect in 2022!”

3 years ago today we made history as the first same-sex couple to be on the cover of @parentsmagazine. I can’t wait for our boys to be old enough to know how meaningful this was to us as parents and as gay dads. We feel the love from this amazing community & are so grateful.❤️ pic.twitter.com/TWeYZZiskY

On his Instagram stories, Shaun went further, posting a video saying, “Someone in the comments asked, ‘Do people really send you messages about me dancing and shaking my ass?’ Yes, they do! And it’s crazy.

“And one particular comment, I’m like, oh, just because you have kids you’re supposed to stop shaking your ass? Yes, I have kids, bitch, and I have a good ass sex life too! That’s why some of you out here stop having sex … that’s why some of these people be cheating on people. Child, when they go to bed, shut it down!

“Me and Scott have a good old sex life, trust and believe! Our kids see us hug, they see us kiss, they see me shake my rump, they see Scott come up behind me and hug me. Why am I going to hide love?

“We don’t hide nothing,” he said, before clarifying, “except behind–you know–behind closed doors.” We presume he’s talking about bedroom activity staying in the bedroom.

“You all need to like get it together because I am just not in the mood for that, it’s just too much,” he continued.

Whether you’re a fan of his workout or not, kudos to Shaun for reminding people that parents are sexual beings, too – including gay dads. Keep shaking that ass!

P.S. For more info on him and hubby Scott, the couple posted a sweet video toward the end of last year reflecting on their ninth wedding anniversary. You can watch it below.