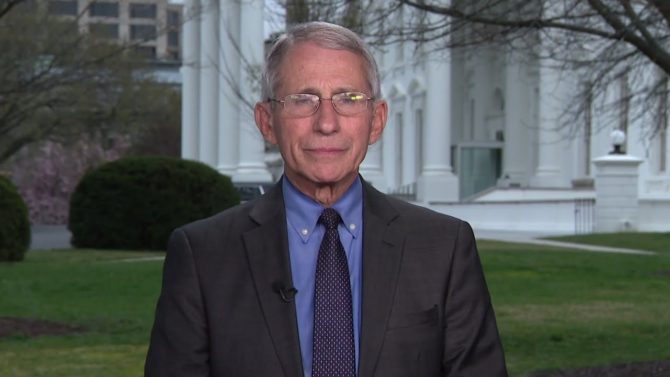 Dr. Anthony Fauci, the infectious disease expert that has become the leading voice of reason on COVID-19 in the United States, has opened up about his experience dealing with another national epidemic: the AIDS crisis. Much as with the conspiracy theorist fanatics of COVID, AIDS conspiracy theorists did their best to silence Fauci, including sending him death threats.

Fauci recalled to Fesh Air host Terry Gross the chaos and fear of the AIDS years. Gay activist Larry Kramer openly accused Fauci of murder during the epidemic, and activists staged violent protests outside Fauci’s office in the National Institutes of Allergies and Infectious Diseases. They also began to personally harass Fauci, threatening his life.

“The activists were justified in their concerns,” Fauci reflected. “They seemed like they were threatening, but never for a single moment did I ever feel threatened by the AIDS activists.”

Related: Activist Peter Staley just lovingly unmasked the remarkable Dr. Fauci and it is quite fabulous

Fauci went on to reveal that he did his own amount of field research–by showing up to gay bathhouses in New York and San Francisco. The aim, he says, was to get a first-hand look at the sexual practices to gain a better understanding of how HIV was spread.

“I rapidly came to the conclusion that if I were in their position, I would be doing exactly what they were doing,” he said of AIDS activists.

Fauci then explained to Gross the jarring reaction to COVID-19 among the general public. Whereas during the AIDS epidemic, protesters begged for experimental therapies and drugs aimed at saving their lives, protesters during COVID didn’t want to know anything about vaccines, treatment or how to prevent spread of the disease. Fauci also received death threats for his attempts at educating the public.

“It makes my head explode a bit,” he added.

In the same interview, Fauci also draws parallels between the inaction of presidents Ronald Reagan and Donald Trump–how neither man would use executive power to curb the spread of the virus or educate the public.

Ultimately, Fauci noted that advances in medical science allowed for the development of drugs that would treat HIV, no longer making it a death sentence. Fauci added that he believes that science also offers a way out of the COVID-19 pandemic through new vaccine technology.

Listen to the full interview here.