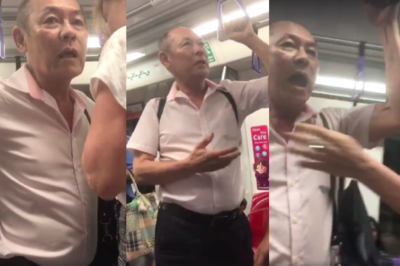 Weird stuff happens on subway cars all the time. But this is definitely one of the weirder of the weird.

Joe DeMarini was traveling on the metro in Singapore recently when he was approached by a gentleman at least 40 years his senior demanding he have sex with him… tonight!

“I was with a friend and he approached me–drunk–and said he was gay, and that he wanted to f*ck me. He said, ‘I know you’re gay, so let’s f*ck,'” DeMarini writes in a Facebook post.

For the record, DeMarini, who’s from Pennsylvania, identifies as straight, though he says he’s often mistaken for being LGBTQ, which doesn’t exactly bother him, but it can be a nuisance at times.

“I don’t exactly fit the ‘masculine’ mold of society, so oftentimes I am mistaken as queer,” DeMarini writes. “For example, I’ve caught flak for carrying a ‘man purse.'”

When the man approached him on the subway car, DeMarini tried to keep his cool, despite the guy repeatedly saying “You’re a f*cking gay. I’m a gay. … I’m your friend. I want you to f*ck me tonight!”

Someone ought to tell this dude he needs to work on his approach.

When DeMarini turned down the man’s advances, the belligerent stranger proceeded to swat at him. When other passengers stepped in to intervene, the man tried flipping the script by claiming it was DeMarini who had come onto him.

The whole thing is truly bizarre.

Hey Singapore friends: just a heads up, this guy physically assaulted me on the MRT, so if you ever see him, be on your…