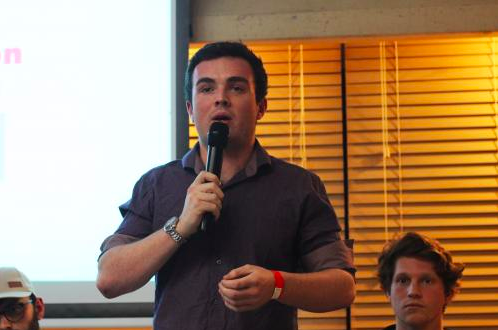 Well, this is awkward. And kind of amazing.

While campaigning to become Cambridge University’s next Student Union President, undergrad Matt Alderton was confronted by his peers about homophobic remarks he made on social media.

Alderton was speaking before a group of fellow undergrads in the Cambridge University Student Union. After giving a short stump speech, someone raised their hand and asked about a homophobic comment he made on Facebook just last year.

Alderton used of the term “batty boy,” an antigay slur used in Jamaica, when criticizing another student. According to the Dictionary of the Jamaican Language, the term stems from the slang word “batty,” which denotes the anus.

When confronted about this, Alderton immediately denied it ever happened then said he was the victim of a smear campaign.

“I see the CUSU smear campaign is operating as effectively as I thought it would be,” he said. “What your question is, is a way to further a smear campaign.”

He continued, “I will not stand here and face quite baseless allegations against a subject matter which does not necessarily affect the actual running of this election.”

Then came the receipts.

When the audience member said they had a screenshot of Alderton’s remarks, he replied: “I’m aware of the screenshot. I’m plenty willing to discuss it. But I don’t think that hustings, when we have all these other candidates, is the time and the place to discuss it.”

That’s when someone else noted the projection screen behind him that said “Meet and Question Your Candidates.” Alderton relented and agreed to address his homophobic behavior.

“I did indeed use a homophobic slur on the Facebook page,” he confessed. “I was unaware that the phrase I used had homophobic connotations. As soon as [my friend] told me what it actually meant, I retracted it immediately.”

He continued, “I’m not proud. I don’t go around and boast about it, and it’s something that I hold in deep shame. But at the same time, I would like you to think if I had believed the ramifications of it, I wouldn’t have posted it in the first place.”

So in less than five minutes, Alderton went from denying ever using the slur, to saying “now’s not the time,” to confessing and offering a non-apology. If that’s not a crash course in the average politician’s experience, we don’t know what is.