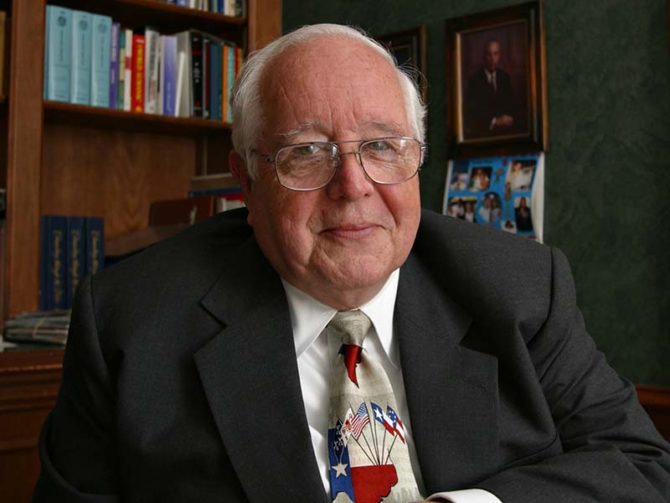 What’s worse (as if that’s not bad enough), the Harris County lawsuit alleges the abuse continued for several decades.

Pressler, who served as a justice on the 14th Court of Appeals and in the Texas state house from 1957–59, allegedly met Duane Rollins at his church and tutored him in Bible study several times a month. The suit claims the abuse began in the late ’70s and did not slow down until Rollins went off to college in 1983.

Pressler has “generally and categorically [denied] each and every allegation” in court.

According to Rollins’ suit, Pressler took him aside as a young teen and told him he was “special,” and that God approved of their secret sexual contact, which included Pressler penetrating Rollins regularly.

Pressler rose to prominence as a religious right figure, spouting Christian “family values” and opposing liberals and moderates at any and every opportunity.

George H.W. Bush picked Pressler to head the Office of Government Ethics in 1989, but he never made it into the position due to an FBI background investigation.

Rollins has had substance abuse issues for much of his adult life and served 10 years in prison on burglary charges.

While Presler’s attorney is attempting to use Rollins’ troubled past to discredit his story, Rollins maintains it was the years of abuse that left him with emotional wounds he wasn’t equipped to deal with.

There’s also the matter of a 2004 battery charge filed by Rollins against Pressler over an incident in a Dallas Hotel room. They settled, though the details are not public.

“He’s been very blatant and very careless over the years running after young boys and picking them up from these various church youth Bible study groups,” he added.

We will certainly follow this story as it develops.