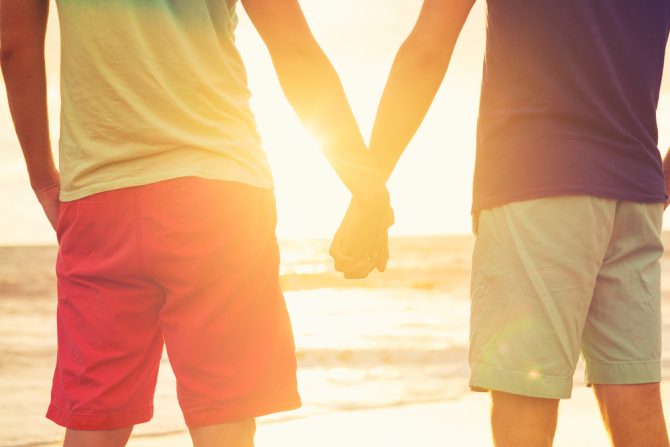 During a New Year’s trip to Tasmania several years ago, my friend Nina and I got a little tipsy and got to lamenting the dearth of true romance in our lives. Well, that’s what we were doing at first. Then it turned into a competition, one Nina, a divorced mother-of-two who lives in Atlanta, figured I had a better chance of winning, judging from all the attention I was getting on Grindr.

“Well, at least you have real-world options,” I told her. “You don’t have to go to a bar or get on Grindr to find a potential match. All you have to do is walk outside.”

Indeed, we’ve been on holiday together numerous times, and in various cities and countries, we’ve had random male locals (a driver here, a hotel employee there, a cute guy hanging out with his friends by a statue of Nikolai Tesla in Zagreb, Croatia) take an interest in us, all of them clearly using us to get to her. That sort of thing tends to happen when you’re a gay man traveling with a fun, friendly, beautiful woman.

Nina disagreed, insisting gay men were the ones with myriad options while straight women had to settle for the slimmest pick of suitors, especially once they were approaching middle age. To prove her point, she mentioned one of her gay friends who tends to get over one boyfriend and slide under another before he even has time to change his Facebook relationship status.

I love Nina, but she had missed my point entirely. You can’t sum up the gay experience by using the mating habits of one gay man. That’s like thinking Jennifer Lopez’s love life is what happens to every woman.

Nor can you assume that increased acceptance for gays among the general population and the proliferation of apps like Grindr and Scruff have made gay romance easier. They’ve increased the expediency of  hooking up, and they‘re generally considered more respectable than roaming public parks and bathrooms. But for those of us who prefer connections that are more serendipitous and less transactional, finding an eligible gay man offline during regular business hours can be like trying to pick out a Lakers fan at a Yankees game.

Nina wasn’t completely wrong, though. In a way, gay men and straight women are in the same sinking boat. They both have to suffer through dating men, who, truth be told, can be an absolute nightmare. But there is one big difference. The world rigs the search for Mr. Right in favor of straight women. Society is set up so that heterosexuals can find each other with ease.

They can meet cute pretty much anywhere. A bold, beautiful straight woman can walk around town, flirting men into submission with her eyes. She can wake up feeling pretty and watch her day unfold like a Modern Love essay. There’s a reason why the New York Times packs that popular section with stories by and about straight women.

The world may be slowly evolving in favor of gays, but we can’t expect to open the front door and step into our own romantic comedy. The majority of men we will encounter on any given day will be straight, which is why we are more likely to meet our partners at a gay bar, on a gay dance floor, or on a gay app. It’s rarely as simple as just getting out of bed and living life.

I have a friend who once met his next fling, a semi-famous Argentine actor, while waiting in line at a bank in Buenos Aires. I listened quietly as he told me the story, both impressed by his unexpected good fortune and also slightly jealous because of it. That’s just the kind of “How we met” story that gay men dream up but can never really count on coming true.

But if you’re a beautiful woman, it could happen to you. The handsome Argentine actor might turn out to be the world’s biggest jerk, but straight people usually don’t have to wonder if the beautiful stranger looking at them across the crowded subway is straight. The world is full of heterosexuals who can assume most passersby share their sexual orientation, and therefore, they can approach without fear of being physically assaulted by a raging homophobe. Simply getting out of bed and living life can be the beginning of a romantic adventure.

Gay men only have that luxury if they’re vacationing on Fire Island or Mykonos or some luxury destination frequented by gays because these days, even the gay ghettos in big cities are increasingly overrun by heterosexuals. Unfortunately for women, once they meet a guy virtually anywhere, the hard work begins. Then they have to deal with the mixed signals, the hot and cold, the commitment issues. Ladies, we feel your pain.

But on the plus side, the universe pounds it into the heads of straight men that they must grow up, get educated, get rich, get married and have kids. That’s always been the Heterosexual Dream. So although they might be on different timetables, straight women and straight men are generally after the same things.

Gay men only recently won the right to legally marry. Most of us weren’t raised to expect the romantic outcome that straight people take for granted. Many of us start out assuming we’ll ultimately be lonely, and lead lives that almost make it a foregone conclusion. Alone again … naturally.

We may finally be able to catch the bouquet and have it actually mean something, but the road to happily ever after remains fraught with many of the same obstacles as before. No matter how far we go, the world will always challenge us in ways straight people will never fully understand.