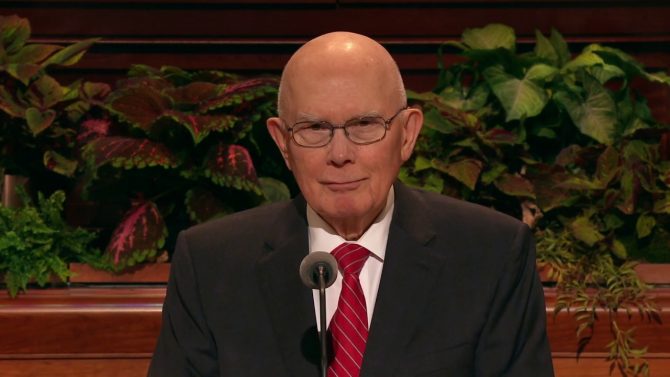 Despite overwhelming evidence proving otherwise, former president of Brigham Young University Dallin Oaks claims the Mormon college never used electroshock treatments on gay people when he was president there from 1971 to 1980.

The remarks came during a Q&A session after a panel discussion at the University of Virginia, when the Latter-day Saint apostle was asked about reports that the school electrocuted gay men in an attempt to change their sexual orientations well into the 1970s.

“Let me say about electroshock treatments at BYU, when I became president at BYU that had been discontinued earlier, and it never went on under my administration,” 89-year-old Oaks insisted.

The video was uploaded to Youtube by Latter Gay Stories, a podcast dedicated to telling LGBTQ Mormons.

But according to Gregory Prince’s 2020 book “Gay Rights and the Mormon Church: Intended Actions, Unintended Consequences,” Oaks’ statement simply is not true.

Prince found that in 1974, 14 gay men were subjected to the electroshock treatments by then-graduate student Max McBride as part of a research project approved by BYU. McBride showed each subject various photos of naked bodies. If the subject “experienced sexual arousal from a photograph of a nude male, he would receive a shock in the bicep.”

“A gradual increase of voltage upon repeated arousals was to serve as a negative feedback stimulus that would, according to the hypothesis, ‘reorient’ him from homosexual to heterosexual, whereupon photographs of nude females were supposed to elicit sexual arousal,” Prince wrote.

“We do not have to prevail in every contest between non-discrimination and religious freedom, that there is room to make compromise and accommodations and better understanding. That’s the best understanding I can give tonight.”

Prior to Oaks’ appearance, members of the pro-LGBTQ Lambda Law Alliance gathered outside the School of Law to protest him speaking on campus.

“Lambda believes that it is dangerous to invite individuals with views openly hostile to the humanity of U.Va. Law’s LGBTQ+ students to speak, particularly on issues of religious freedom and its intersection with LGTBQ+ rights,” the group said on Twitter.

Lambda believes that it is dangerous to invite individuals with views openly hostile to the humanity of UVA Law's LGBTQ+ students to speak, particularly on issues of religious freedom and its intersection with LGTBQ+ rights.

In a statement, the Church of Latter-day Saints said it no longer encourages electroshock therapy or attempts to change a person’s sexual orientation.

“The church denounces any therapy, including conversion and reparative therapies,” it said. “That subjects an individual to abusive practices, not only in Utah, but throughout the world.”