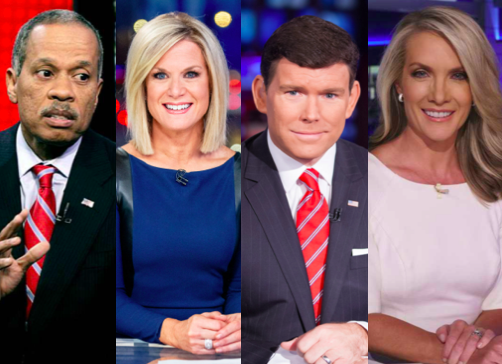 Hey, remember when Fox News downplayed coronavirus and constantly peddled that whole narrative about it being not that big a deal, calling it a “Democratic hoax,” and blah, blah, blah. Well, the virus has officially made its way inside the network and now everyone there is freaking out.

The Daily Beast reports the network is “in a panic” after several of its top hosts, including network president Jay Wallace and on-air political hosts and analysts Bret Baier, Martha MacCallum, Dana Perino, and Juan Williams, were all exposed to the virus late last week.

The exposure happened on a private jet the employees shared from the presidential debate in Nashville back to New York, where the network is headquartered. At least one person on the flight later tested positive for coronavirus, meaning everyone who was on board must now get tested and quarantine.

To complicate matters, Baier, MacCallum, Perino, and Williams were all supposed to lead the network’s election night coverage next Tuesday.

“I believe it will put election night-plans into chaos,” an anonymous Fox staffer tells The Daily Beast. “It will be like starting from scratch… It’s not good for anyone.”

The employee added, “It’s insane that there’s a possibility the anchors will have to host the biggest night of 2020 from their homes.”

Of course, it’s not that insane to anyone who believes in, you know, science. When you do risky things, like galavant around on private jets from place to place during a global pandemic, it’s very likely you will get sick.

Related: Fox News runs untrue segment about how coronavirus is “over”… so everybody crowd into restaurants!

In addition to scrambling to figure out its election night coverage, the network sent out an internal memo saying multiple staffers have now tested positive and so it would be reducing the number of people allowed in the building as well as implementing “enhanced testing procedures.”

But another Fox insider says the network has been lackadaisical about following public health guidelines, particularly when it comes to wearing masks in the workplace.

“In the elevators, everyone’s good about masks,” the insider claims. “But in the offices, nope.”

The network also hasn’t done a great job about social distancing on air or behind-the-scenes.

No social distancing happening on the Fox News set this morning. pic.twitter.com/EPhZNHtgN0

Sadly, the outbreak comes just one week after longtime Fox News producer, Rob Brown, who had been with the network since 1999, died from coronavirus complications.

The network has been widely criticized for downplaying the seriousness of the pandemic early on and well into the summer, even as cases numbers grew and the death toll climbed.

In April, the nonprofit media watchdog group Media Matters for America said Sean Hannity was one of the worst offenders when it came to spreading coronavirus misinformation.

And in July, Tucker Carlson said that mask-wearing has “no basis in science” at the same time the CDC called on all Americans to wear face masks to help slow the spread of the virus.