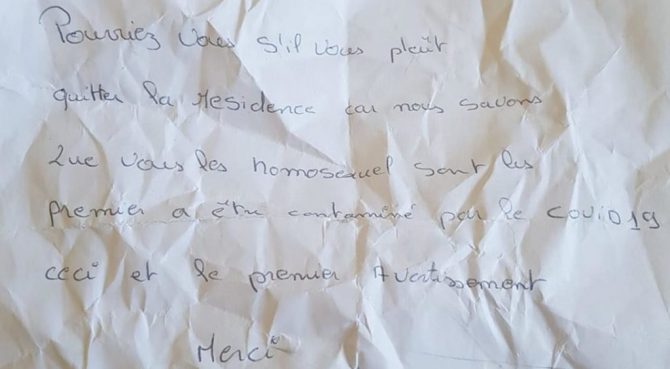 French police in the city of Marseilles have opened an investigation into a crime of harassment against a gay couple. The pair received a note asking them to move because “homosexuals are the first to be contaminated” by COVID-19.

The French queer magazine TETU reports that the man who alerted police, identified only as “David” age 33, works as a hospital caregiver. His spouse who delivers for Uber Eats found the note on his windshield. The pair contacted law enforcement based on the contents of the letter.

“Could you please leave the residence because we know that you homosexuals are the first to be contaminated with COVID-19,” the note said. “This is the first warning.”

Alarmed, the two men contacted local police, who dismissed the note as a threat and refused to investigate the harassment. David then posted it to his Facebook page, and was contacted by police in the nearby city of Bordeaux.

“[They] told us that they were going to make sure it was treated, that maybe they could recover the DNA, analyze the writing,” David told TETU. He also added that the couple has lived on lockdown for the past two weeks. He also added that despite the new police investigation, he and his husband feel less than reassured about their security.

“[COVID-19] affects me doubly, I’m a carer and I’m gay,” David acknowledged. “I can understand that, psychologically, it’s hard to be locked up at home, I think there are some who crack a little…. Personally, I didn’t expect to receive a word like that about my sexuality. I had never been confronted with homophobia in my life.”

In the United States, conservative figures have vilified queer people during the coronavirus outbreak, going so far as to blame the virus on the very existence of LGBTQ people. Conservative commentator Mark Steyn has blamed the San Francisco curfew on gay people, claiming that the city’s HIV+ population would drop dead en masse without it. Minister Rick Wiles has welcomed COVID-19, saying it will cleanse the world of gays. In Israel, Rabbi Meir Mazuz referred to the virus as a “Death Angel” come to rid the world of LGBTQ degenerates.