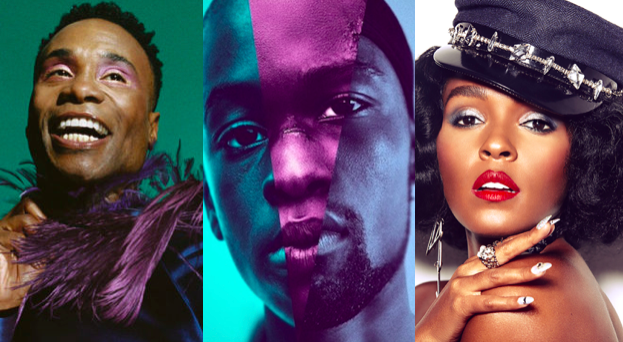 Do you remember where you were 10 years ago? I do. I was either lounging on my living room couch, cooling down in a movie theater, or hitting a bar or dance floor in Buenos Aires (the city I’d relocated to from New York City four days after the fifth anniversary of 9/11). Wherever I happened to be passing my time, if I was having a gay pop-culture moment, chances are I was drowning in a sea of white: Milk, A Single Man (possibly my favorite film of 2009, despite its utterly monochromatic casting), reruns of Queer As Folk, Kurt on Glee, Adam Lambert, Lady Gaga fans, etc.

LGBTQ finally had earned the visibility we’d spent decades clamoring for, with A-list actors regularly earning Oscar nominations after going gay for pay. Hollywood’s rainbow flag, though, was dominated by one color. While many bemoaned the sad fact that gay men were finally ready for prime time yet straight actors usually got to play them, I was equally concerned that both the gay characters and the actors hogging the roles were almost always white.

Then along came Moonlight to shake up movies in 2016. It was revolutionary for a number of reasons, including its ability to do what Brokeback Mountain had failed to do a decade earlier: win the Oscar for Best Picture (take that, blindingly white La La Land). While its Oscar-night triumph was the blackberry on top, Moonlight will go down in history as the film that truly brought black and gay into the mainstream. That’s its legacy. Without it, we might not have gotten Eric on Sex Education, Lionel on Dear White People, and Damon, Ricky, and Pray Tell on Pose — gay black males who got to do more than offer campy comic relief to white leads.

Last year, we got a biopic with a main character who was black and gay — jazz pianist Don Shirley in Green Book, another Best Picture Oscar winner — though he was played by Mahershala Ali, another straight actor. Ali took home his second Oscar for the role. He’d scored his first for playing a straight character in Moonlight, making him one of our key black hetero allies in Hollywood during the 2010s. Kevin Hart could learn a lot from him.

Billy Porter took black gay visibility leaps further in 2019 when he earned a Golden Globe nomination and nabbed an Emmy for his role as Pray Tell on Pose. He was only the fifth black actor and the first openly gay black one to win an Emmy for Outstanding Lead Actor in a Drama Series (Bill Cosby, who won three consecutive times for I Spy, remains the only African-American to claim victory more than once in the category) and the first actor of any race to take it for playing a gay character.

The 50-year-old showbiz vet, who made headlines at the beginning of the year for daring to wear a tuxedo gown on the Golden Globes red carpet, already had added a Tony and a Grammy to his collection of career accolades during the 2010s. He just might kick off his 2020s with an Oscar for his upcoming role as the Fairy Godmother in the big-screen musical adaptation of Cinderella. (You read it here first!)

Ali’s and Moonlight’s Oscar wins, Porter’s Emmy grab, and all the black actors, gay and straight, playing pivotal gay roles on TV and in movies (an increasingly expanding list that now includes Andre Braugher on Brooklyn Nine-Nine and Tituss Burgess on Unbreakable Kimmie Schmidt, among others) sent an important message: in many ways, we finally have overcome. How much we’ve evolved from the ’90s when, offscreen, Denzel Washington allegedly cautioned Will Smith not to kiss a guy onscreen in Six Degrees of Separation, Smith’s first major movie role.

Here in the real world, real strides were being made by gay apps like Scruff and Grindr to fight sexual racism after years of pretending that “No blacks,” “No Asians,” and “whites only” was only a preference. We might never completely eradicate discriminatory language from the gay hook-up lexicon, but at least the apps are doing more not to be complicit accessories to the racism that still taints and taunts our community.

Meanwhile, blacks were coming out both in sports (basketballer Jason Collins and footballer Michael Sam) and in music during 2010s. Frank Ocean turned the tide in 2012 when he revealed that his first love had been a man, and Lil Nas X kept the waves rolling in when he came out at the close of Gay Pride Month and still ended 2019 with the longest running number-one single ever (“Old Town Road”) and six Grammy nominations.

And let’s not forgot Tyler, The Creator’s Igor, an album built around a love triangle featuring two men in love and the ex-girlfriend coming between them. Rap remains a mostly straight (and homophobic) world, but Tyler, who teases he might be gay or bisexual without claiming either label, is up for the Best Rap Album Grammy.

On the darker side (no pun intended), there was the unfortunate case of Empire actor Jussie Smollett, whose career imploded earlier this year after he was charged with falsely claiming he’d been the victim of a homophobic and racist attack in Chicago. Hoax or not, the story cost Smollett his job on Empire, and there was plenty of collateral damage. Gay bashings, especially when racism is also a motivator, might not be taken as seriously in the future. Still, the fallout forced us to acknowledge that the story would not have been possible in a society where gay black men don’t live with two targets on their backs.

Things may not be perfect as we head into the 2020s, but when you have Pete Buttigieg, the first openly gay man with even a distant shot at scoring the Democratic Presidential nomination, being forced to acknowledge that black lives do indeed matter, a revolution is clearly underway. May the next Roaring Twenties push gay black power even further to the forefront.