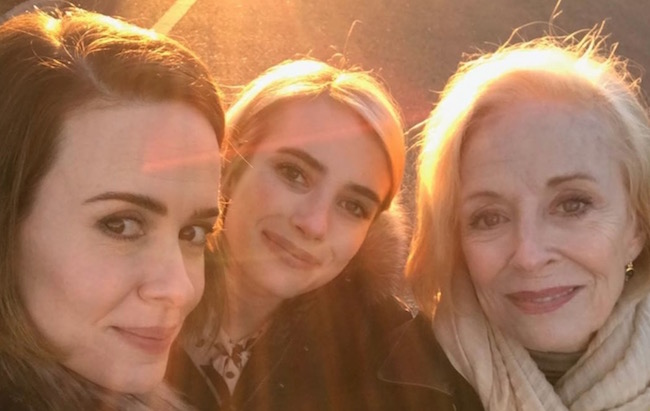 Sarah Paulson opens up about her relationship with Holland Taylor in a new interview by The Edit.

While revealing that she vastly prefers the company of “left-of-center” people:

“My life choices are, um, unconventional. I’m with a much older person [Sarah is 42, Holland is 74] and people find that totally fascinating and odd, and, to me, it’s the least interesting thing about me.”

“But I do feel a bit unconventional. I am a woman of a certain age who chose not to have children, and who has made my career my priority. I am the captain of my own ship, and I’ve never looked to anyone else to validate that, or tell me it’s okay.”

No filter @emmaroberts ??and my love #holland taylor

Related: Sarah Paulson will play a lesbian who loses her mind after Trump’s election. Typecasting?

That photo features Paulson to the left, her American Horror Story -co-star Emma Roberts in the middle, and Holland to the right.

“Early on, when people found out I was with Holland, some said: ‘I think you have to be careful, I’m afraid it’s going to affect your career negatively.’ I was like, what? It never occurred to me at all.”

She admits she was wary of thanking Holland when winning an Emmy for The People v. O.J. Simpson, but ultimately went for it:

“I had a moment of societal concern; wondering if, maybe, people who didn’t know that about me would be like, wait, what?”

She did it, anyway.

Elsewhere, she talked about her WhatsApp group, which consists solely of her costars from Ocean’s Eight, which is out next year. The other members of the group include Rihanna, Cate Blanchett, Sandra Bullock, Helena Bonham Carter, Mindy Kaling and Awkwafina.

“I’m not going to lie, it is a very cool chain to be part of. We can go weeks without a chirp, then someone sends one message, and it’s like – ‘brp, brp, brp’ – your phone just blows up for hours.”