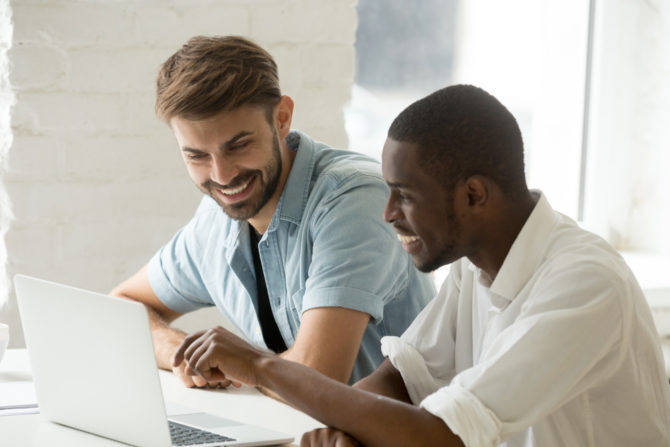 One guy’s dream life must be filled with HR violations: He’s practically salivating over his coworker.

“Have you ever had a coworker you worked with constantly who was so obscenely attractive that it made it hard to concentrate on your job? How did you work through that so that you wouldn’t be distracted?” the dude asked his r/askgaybros buddies recently. “I don’t hit on him or anything. I’m a good, productive worker, and we get along. But it’s getting frustrating having to force my mind back to work constantly ‘cause he is insanely attractive.”

(This thirsty Redditor described his workplace crush in another Reddit thread, writing, “It’s like an ass like that walks by and your mind goes blank. My guy basically has an insane perfect Adonis body, but then has this obscenely fat perfect ass. And we’re close, too, but it’s so hard to concentrate at work. I’ve yet to see a hotter guy in my entire life.”)

Related: A man having an affair with a male co-worker wants to know: how should he tell his girlfriend?

Commenters, many of whom could relate, pointed out that this guy had better just keep his mind on the task at hand, not the ass on view. More than one Redditor, in fact, cited the “don’t sh*t where you eat” adage.

“Your only focus at work is to make money and go home,” one wrote. “Hot guys come and go, but you’re at work to make better your own career.”

Another said, “All you can do is force yourself to look away. I feel like constant exposure will make it easier. Eventually, you’ll just appreciate the eye candy at work.”

One guy said he’s been crushing on one of his direct reports for months now. “I know it’s never going to be anything, but feelings are feelings,” he wrote. “You know, they just happen. Just don’t let it consume you. It’s really not worth it.”

Related: Straight dude pens essay about coworker turning him from homophobe to ally

Another commenter wrote more words of wisdom: “I’ve had extremely attractive coworkers and direct reports in the past. The way I deal with it is twofold: 1) I have a ‘work-mode’ where I’m very focused on work and outcomes and ignore looks. This is my ‘straight’ mode, and I do not flirt with anyone at work, I’ve become pretty good at compartmentalizing it. (I keep things friendly but always super professional.) 2) I have a rule that I do not ever get involved with anyone that I work with/works for my same company. This is a foundational rule of mine.”

And finally, one guy brought the jokes. “Had this issue since I’ve been working from home. Every time I pass a mirror, I can’t help but stare. It’s tough, but I struggle on.”