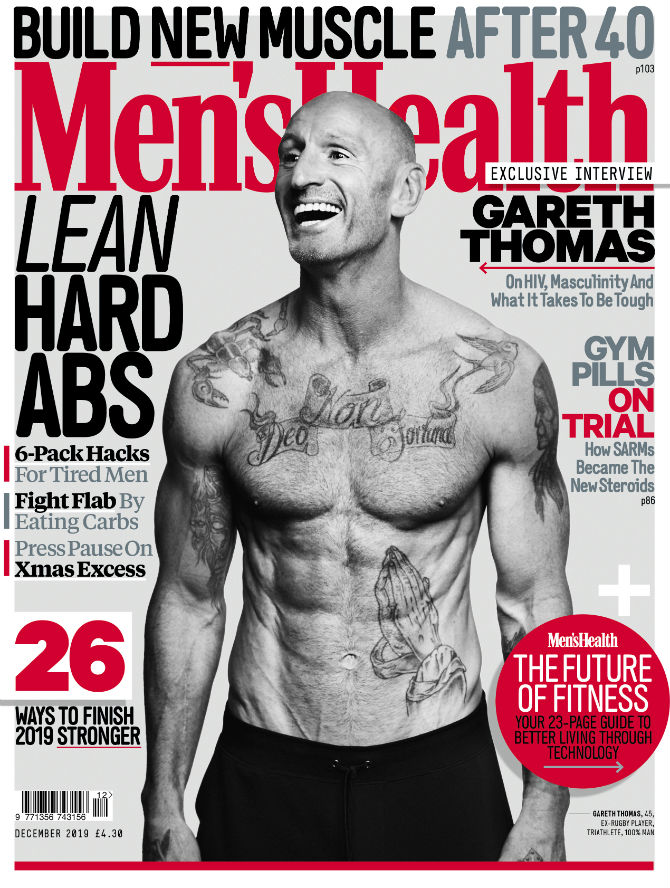 Welsh rugby player Gareth Thomas features on the cover of the UK edition of Men’s Health magazine. It is the first time the magazine has featured an openly HIV positive cover star and health advocates are hailing it as historic.

Thomas, 45, who captained the Welsh rugby team during his successful international career, came out as gay in 2009. He revealed he was HIV positive in September of this year after being pressured to do so by tabloid journalists threatening to disclose his status.

Although he’s always been super fit, he says that learning he was HIV positive pushed him to take even greater care of his body.

“I felt I needed to show another side of me, as far as fitness goes. So, I took that fitness to another level, because my mental images of people living with HIV were always frail, always weak. I wanted to display the total opposite of that.”

This was part of the motivation behind agreeing to appear on the cover of the magazine.

“I wanted to do this because who’d have thought, 20 or 30 years ago, that a man living with HIV could be in a magazine like Men’s Health?”

Shortly after revealing his status, Thomas took part in a grueling 12-hour Iron Man triathlon, which included a 2.4-mile swim, a 112-mile bicycle ride, and a 26.22-mile marathon run.

Thomas has talked openly about how life in the closet during his career was disastrous for his mental health. His mental wellbeing remains something he has to be aware of and nurture.

“There are times when I get really insecure,” he tells the magazine, “because even though people have been amazingly supportive of me, what people know about me now actually makes me feel a little exposed. I walk down the street, and there’s that realization that people who I don’t even know are aware of my medical history, my sexuality. That can be quite invasive.

“But the reality is I’m in a better place now than I ever was when people didn’t know my sexuality, so I’d rather it be this way than how it was before.”

Being so publicly known does still come with risks for Thomas. In November last year, Thomas was assaulted on the streets of Cardiff by a group of teenagers who mocked him and his husband.

“If I hadn’t challenged them, I would not have represented who I am or what I expect people to do. But then when they came and started attacking me, I realized I couldn’t fight back, because if I did, I’d be behind bars now.

“So, I had to just sit there and take a beating from a gang of lads, which was kind of frustrating. But it was a realization that this is what I have to do to be able to get my point across.”

Editor Toby Wiseman says, “I made the decision to approach Gareth with the offer of a cover profile because, soon after he made his bold announcement in September, it struck me that he symbolizes a positive, thought-provoking change in the way our culture now perceives masculinity.

“At a time when boorish, chauvinistic male stereotypes are rightly being hung out to dry, Gareth represents a more complex, nuanced model. He is the brave, battle-scarred warrior with the tender heart; the leader of men who chooses the love of men.”

If people with HIV are on effective medication and consistently have an undetectable viral load, there is zero risk of them passing the virus on. Most health experts agree that being HIV undetectable ensures such individuals have every chance of living a lifespan the same as those without the virus. It’s one reason why it’s so important to know your status.

“Gareth Thomas, with his hard, muscled body, demonstrates the strength and power that we who live with HIV can have.

“Exercise is important for long term health for everyone … [and] can play a crucial role in combating those conditions which disproportionately affect people with HIV, including heart disease, type 2 diabetes, and depression.

“Thomas may be the first openly HIV-positive man to grace the cover of a men’s fitness magazine but I’d be willing to bet he won’t be the last.”