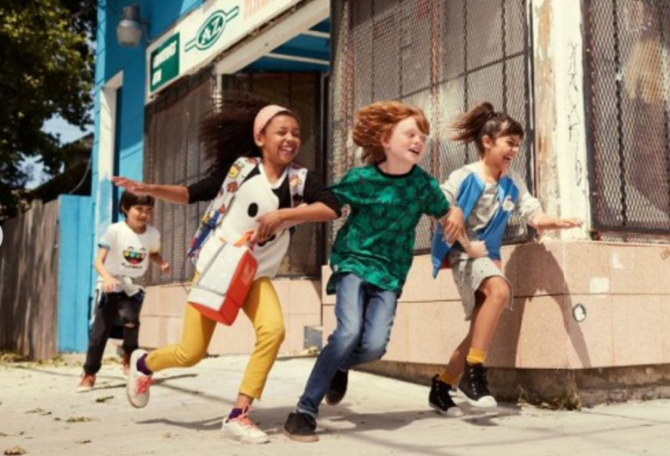 It started with gender-neutral bathrooms. Now, discount retail giant Target is launching a gender-neutral line of children’s clothing. And just in time for back-to-school shopping!

On July 17, Target will unveil its new line of gender non-specific threads for kids produced by Toca Boca, an app-turned-lifestyle-company based in Stockholm.

“Our vision for the clothing line was to do what we’re good at at Toca Boca, which is play, and translate that into everyday experiences for kids,” Mathilda Engman, Toca Boca’s design director, says.

The collection promises a large selection of clothing, sleepwear, bedding, backpacks, toys, and other accessories ranging from about $6 to $30 and tailored for everyone–boys, girls, and everything in between!

The products will come in a variety of gender-neutral colors and will feature quirky, gender non-specific cartoon-like characters “not recognizable as any creatures known on Earth.”

“It has a surprise element,” Engman adds. “It’s a bit weird, and a combination of something you wouldn’t expect with something that is everyday and ordinary.”

Naturally, homophobes on Twitter are already freaking out over it, reviving the tired, old #BoycottTarget hashtag:

So Target is releasing a new gender neautral kids line of clothes. I guess it's not politically correct to be a boy or a girl now. WTF

We have boycotted you a long time ago. If you are confused by gender, we are not. #BoycottTarget

I support Woods here Why would you make your kid a target? Why drag a kid through what gender they are before they even know what they like.

https://t.co/3wtzb0M0sg via @YahooStyle Dumb move @Target u don't want to survive do u? Keep #BoycottTarget ALIVE!! Fire ur #CEO

Still proud to say i havent shopped in a Target store since their pro perv stance. #BoycottTarget ?

But most people are totally stoked about the new line:

Watching all the cis cry over Target's gender neutral clothing is hilarious. I'm just jealous they're not in my size, they're cute af!

Exciting! @Target has new line of gender-neutral children's clothing. Hostile comments remind me why we need this! https://t.co/pn5SI3Ezr2

It's awesome to see this line of gender-neutral clothing coming to @Target https://t.co/Sm5gXQJMHb

Check out some of the Toca Boca products that will be available on Monday, and here’s hoping they extend to the adult market soon because some of these clothes are actually kinda cool…

Toca Life is coming to life! For the first time ever, we’re launching clothes, backpacks, sheets for your bed, activity books and more ?Coming to Target on July 17!? #tocaboca #tocalife

The collection you’ve always wanted is coming exclusively to @Target on July 17 ? ? For the first time ever, we’re launching clothes, backpacks, sheets for your bed, activity books and more! Are you excited?! ? #tocaboca #tocalife

Head to toe in Toca Boca? ??Yes please! Clothes, backpacks and much more are coming to @Target on July 17 ? #tocaboca #tocalife

We know, we’re excited too! Our brand new clothes, backpacks, sheets for your bed, activity books and more are coming exclusively to @Target on July 17. ? ? #tocaboca #tocalife

The cat backpack or the cat lunchbox? ? Coming exclusively to @Target on July 17 ?? #tocaboca #tocalife