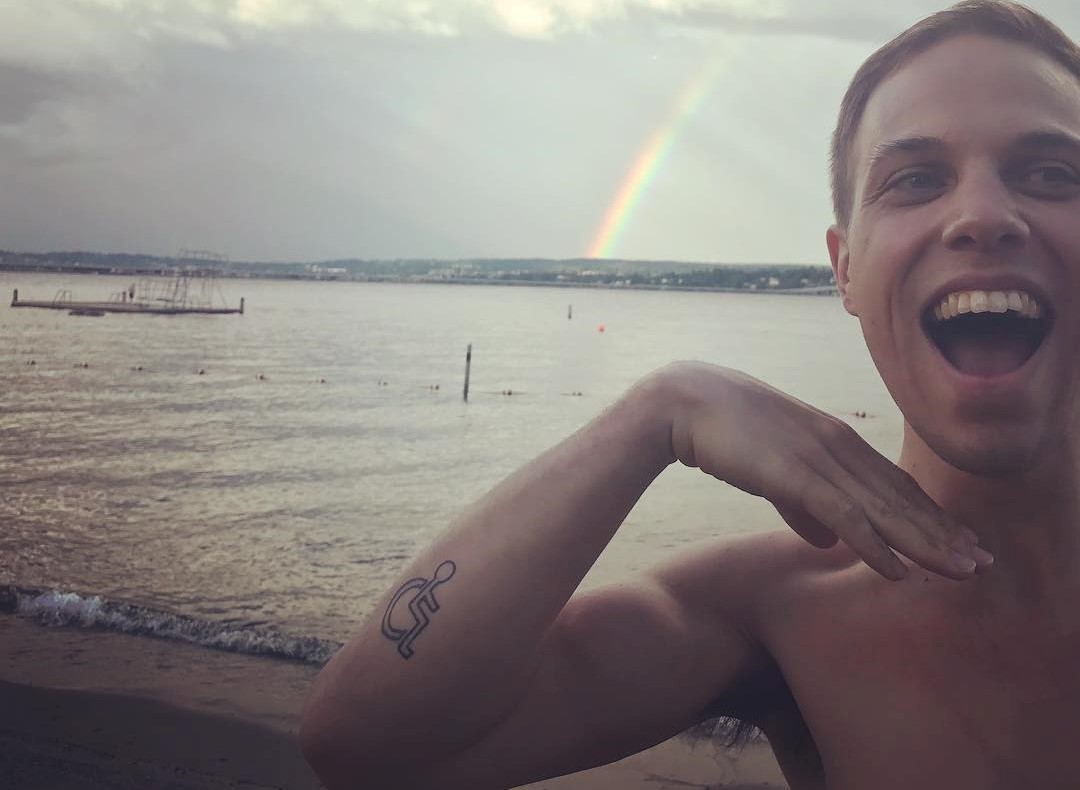 There I was, naked in bed, drunk not only from alcohol, but shame as well.

“Please Josh. I need this,” my boyfriend, who I’d been dating for two months, whispered–scratch that–pleaded, next to me. “If you can’t do this, then we’re going to need to talk.”

“I–I’m sorry” was all I could muster.

There I was, having just tried to top my boyfriend for the first time and as you can guess, utterly failed. I wish I could say it was the alcohol. Or maybe my Cerebral Palsy was to blame? Either way, I just couldn’t do it.

It’s not that I didn’t want to. I remember when we first met on Grindr, I’d mentioned to him (whose profile said he was versatile) that I’d never topped before but had always been curious about it. And I was! The opportunity had simply never come up. Most of my hookups up to that point were with tops and my last serious relationship, well, he really wasn’t that interested in having sex me (more on that here). So when the opportunity finally arose for me to slide into his, ahem, DM, I thought it would be easy.

But it was anything but. I can’t even describe where it went wrong. Up until the moment of insertion, every fiber in my body wanted to top him. It was almost animalistic, the desire I felt. But as soon as I reached the moment, it’s as if my brain was suddenly jolted awake after a long winter’s nap, and I couldn’t stop my thoughts from racing. Oh my god, I have no idea what I’m doing. Oh god, what if I can’t do it? What if it’s bad? I’d work myself up so much to the point to where my erm, balloon, would suddenly deflate and I could no longer enter him.

And it completely sucked. As much as I wanted to top him, it was as if there was this deep disconnect between my brain and my body. I tried a few times after that. At one point, I even bought some happy blue pills, hoping they’d help me get over this hump. No matter how much I tried though, nothing worked.

Which, like, was my versatile invite lost in the mail? Thrown into the bottom (haha) of a well? Left abandoned at the top (tehe) of Mt. Everest? It seems everywhere I look anymore, everyone and their mom is versatile these days. And oh, how I long to be one of them! It really does seem like vers people have more fun. I’ve come to understand though that maybe, just maybe, I’m not meant to be versatile despite my many attempts.

But can a strictly bottom guy like me still exist in this world?

It doesn’t help that everything I read seems to make me feel more like a defect. “It’s Time to Stop Pigeonholing Gay Men as Tops and Bottoms” declared GQ in 2019. “Is it time to abandon the top and bottom labels once and for all?” questioned Queerty‘s very own Graham Gremore in 2017 (which, xoxo, love you, Graham!). Or how about this doozy?! “Top to Bottom: How Defining Your Position Can Limit What You Do in the Bedroom” Now please excuse me while I go untwist the metaphorical knife in my side.

Kidding aside, I totally understand what all these articles are saying: that we shouldn’t let labels like “top” or “bottom” define what we do in the bedroom… but that’s easy to say when you are physically capable of, and have the option to do both. For me, I can’t top, so where does that leave me? How else am I supposed to know whether I am sexually compatible with someone? Are all my future relationships doomed if I can’t find someone who is strictly top?

Going back to my boyfriend, (SPOILER ALERT!) our relationship didn’t last. In fact, it was after maybe the fifth time I tried to top him (and failed, save for one time that lasted .05 seconds so it doesn’t really count) that I think he finally had enough. I had been sitting at home, waiting for him to come home from work, when he walked in and uttered the dreaded “we need to talk” line.

Through tears, he told me how he had been struggling and had come to discover that “we were both bottoms.” When he said it, I couldn’t help but laugh a little, given he’d been topping me for the last two years, but it made sense in retrospect. After all, he’d told me being topped was something he “needed” when we first started dating. If I couldn’t physically give that to him, then what was the point in staying together? It would have been a disservice to us both.

It’s been more than a year since our breakup, and I can’t help but worry about my next relationship. In a world where it seems everyone is vers, is there any hope for me, a total bottom? Perhaps with enough time, I’ll come to realize that all is not lost. Maybe I’ll meet the top of my dreams who accepts me in all my bottom glory. Or maybe–however far-fetched–I’ll come to discover my versatile invite was simply stuck in transit.

Josh Galassi is very gay and very disabled, if you haven’t noticed. Sometimes, he writes about both those things, and sometimes, he doesn’t. He lives in Seattle with his dog Carmen Sandiego, who, it turns out, was on Craigslist the entire time (where he bought her). You can find him on Facebook and Twitter, or at a nearby coffee shop obsessing over cold brew.