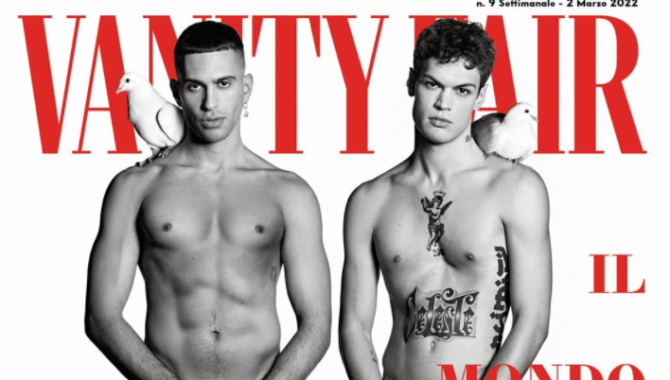 An Italian Vanity Fair cover was apparently too hot for Instagram, but not all of Instagram, just the story feature.

The nude, black-and-white image on the magazine’s latest issue features Eurovision stars Mahmood and Blanco. The pair will represent Italy in the 2022 Eurovision Song Contest in May.

Mahmood shared the cover on his Instagram story, and alleges it was removed by the app and cited as a violation of guidelines.

That prompted the @vanityfairitalia account to share a censored version of the photo and defend its use of “artistic” and “symbolic” nudity, as opposed to something obscene.

“We portrayed them like this because their stories are like a blank page, full of tattoos and dreams, of youth, something strong enough to shake us all,” said Vanity Fair Italia’s director-in-chief Simone Marchetti. Well OK then!

Either way, the original cover remains on the @vanityfairitalia account, so perhaps the algorithm was just a bit trigger-happy in the moment Mahmood’s story was removed.

The song that Mahmood and Blanco will perform is called “Brividi” (Shivers). Many interpreted it as an anthem of gay love, but the singers say its more universal than that.

“We want to bring the universal freedom to feel free to be able to express any kind of love. In general, in totality. We don’t want to pigeonhole love, we want to give it 100% free rein,” Mahmood said.

Here’s the song, with english translations: