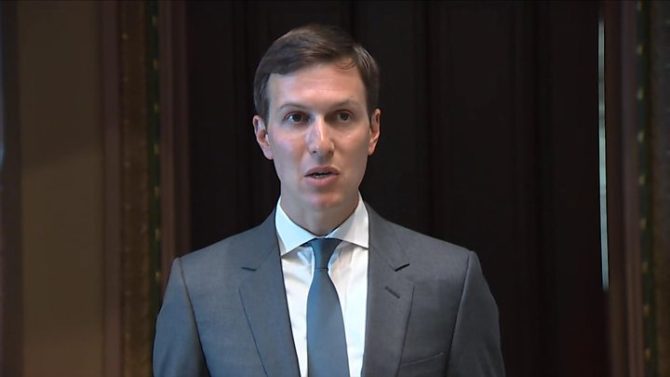 So Jared Kushner made his very first public speaking appearance yesterday to a group of tech CEOs where he discussed updating the government bureaucracy’s technology. For many people, it was the first time they had ever heard Kushner’s voice.

And what a voice it is!

Shrill, nasal, a little bit shaky, and not dissimilar to a middle schooler in the throes of puberty giving, as one Twitter user so eloquently put it, “an 8th grade valedictory speech,” Kushner talked about how “exciting” cloud computing and data migration truly is.

But don’t take our word for it. Hear for yourselves…

He speaks! Have you ever heard Jared Kushner's voice before? Here you go. pic.twitter.com/QKElf1bynn

Suddenly, it all makes sense why Kushner has never opened his mouth in public before, or why Donald Trump didn’t use him more on the campaign trail, instead opting for folks like soap opera actress and avocado farmer Kimberlin Brown and UFC President Dana White instead.

Jared Kushner is an important reminder that you can't buy puberty.

If a gif could represent everyone's reaction to Jared Kushner's voice. pic.twitter.com/jEsiX28sMG

Jared Kushner is one of those guys that just looks shady and when he finally speaks you're just like, "Ya this dude is sketch"

Why Jared Kushner always seem like he low key looking at your dick from one urinal over pic.twitter.com/GyRZASLxuJ

Kind of disappointed. Jared Kushner's making his first public remarks and he hasn't been hiding a cool Darth Vader voice. At all.

Wow, so THIS is what Jared Kushner sounds like??? pic.twitter.com/rYYojqanq6

I'm fairly certain if I listen to this I'll be cursed.

Now that you've heard Jared Kushner's voice, let me remind you of this little gem. pic.twitter.com/sxrfpae65H

After hearing Jared Kushner's voice, I understand why Ivanka was staring at Justin Trudeau with those hungry eyes.

I wish I could go back to when I'd never heard Jared Kushner's voice. #yechh