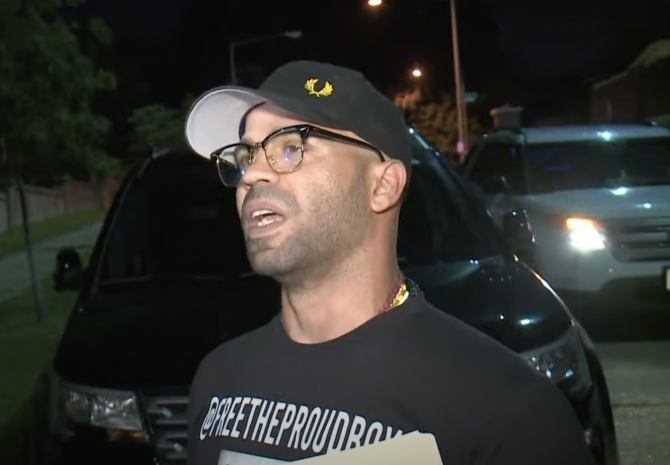 Henry “Enrique” Tarrio, leader of the alt-right hate group Proud Boys, would like to speak to the manager.

Tarrio is currently serving a five months sentence in a Washington, D.C. jail for burning a Black Lives Matter flag stolen from a historic Black church. This week, he begged a judge to reduce his sentence to 90 days and allow him to finish it under house arrest because the facility where he’s being held is simply not up to his standards.

“I’ve been to jail before and what I’ve seen here, I’ve never seen anywhere else,” Tarrio told Judge Jonathan H. Pittman on Monday. “This place needs to be shut down immediately!”

Tarrio whined that, not only are the correctional officers mean to him, but his cell keeps getting flooded with dirty toilet water from a neighboring cell and it’s disgusting. Also, the halls smell like cigarette smoke and the food is just terrible.

His lawyer, Lucas I. Dansie, said that Tarrio’s “meals are literally thrown in his cell, cold and frequently inedible.”

Tarrio said the conditions he’s had to endure are “insane,” calling the whole place a “gulag,” and that he fears for his life every single day.

“I’m deathly afraid that something is going to happen to me,” he said.

Attorneys for the D.C. Department of Corrections disputed most of Tarrio’s claims and said he hasn’t suffered any mistreatment. As for the flooding, they admitted there has been an issue with another prisoner regularly plugging up his toilet in protest and they’re dealing with it.

This isn’t the first time the D.C. facility, which is also currently housing several January 6 rioters, has been accused of unsanitary conditions and abusive practices.

In October, a U.S. Marshals Service inspection found water in certain areas “had been shut off for days” as punishment, creating an “overpowering” stench from “standing human sewage.” This resulted in the Justice Department transferring 400 federal prisoners to a different facility.

“They don’t move 400 prisoners for nothing,” Tarrio told the judge.

Proud Boys was first established in 2016 and has been designated a hate group by the Southern Poverty Law Center. It doesn’t allow trans men to be members and is known for opposing things like mask mandates and Black Lives Matter as well as protesting drag shows. Last year, thousands of LGBTQ people made #ProudBoys trend on Twitter by posting photos of proud gay couples to drown out content related to the group.