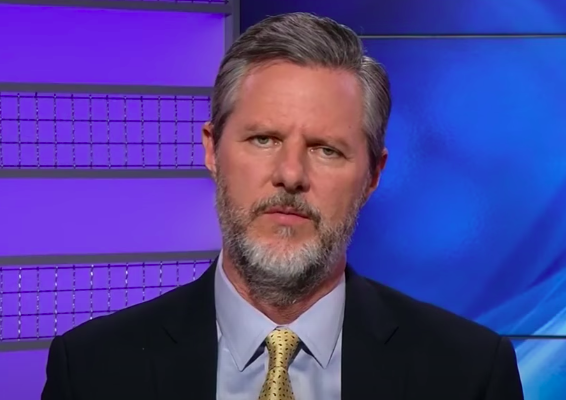 Evangelical leader Jerry Falwell Jr. appears to have done a complete 180 when it comes to his puritanical beliefs about sex.

The ex-president and chancellor of Liberty University is asking a court in Virginia to dismiss a $40 million lawsuit filed against him by his former employer after that explosive pool boy sex scandal last summer.

In April, Liberty filed the 74-page breach of contract lawsuit accusing Fawell of withholding “damaging information” when he renegotiated his contract in 2019 and choosing “personal protection” over “his clear duties as an executive and officer.”

The lawsuit also accused him of “excessive use of alcohol” and hanging onto personal property, including “confidential information,” belonging to the university.

In his filing seeking dismissal this week, Falwell argues Liberty is trying to destroy his reputation and publicly shame him with a photo he posted to his personal Instagram page last spring.

The photo, you may recall, showed him with his pants open and his arm around the waist of a woman other than his wife. In his other hand appears to be an alcoholic beverage.

Shortly after posting it to Instagram, he took it down, but not before it was screengrabbed and widely shared for posterity.

“The rehashing of these events and protected defamation of Falwell through litigation serves one mission–ruining Falwell’s reputation through mischaracterization of events and public shaming through out-of-context pictures filed in a public complaint,” the filing reads.

Furthermore, he says, he had “no duty” to tell the university about his “private matters.”

In addition to asking for Liberty’s $40 million lawsuit against him to be thrown out, Falwell wants his entire severance package paid out in full.

When he initially left the school last summer, he negotiated a $10.5 million package to be dispersed over the course of several years. Now, he wants it all in one lump sum. Probably so he can pay off all his legal bills, which have to be pretty mountainous by now.