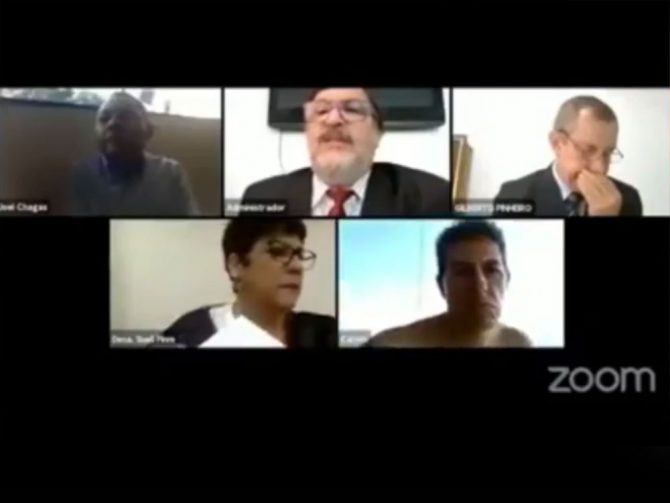 The coronavirus pandemic has people all over the world working from home, including many government officials. But not everyone is adapting to the changes as quickly or smoothly as others.

Earlier this month, a Brazilian judge lived out everyone’s worst nightmare when he didn’t seem to realize his camera was on and that his colleagues could see him half-naked on a video call.

Carmo Antônio de Souza is an appellate judge in the northern Brazilian state of Amapá. On April 7, he appeared shirtless in a Zoom conference with five other members of the Amapá State Court of Justice.

At the start of the meeting, 57-year-old de Souza could be seen drinking from a glass while staring into his computer screen at the other six court officials, who were all dressed in appropriate work attire.

Upon realizing he was on camera, he awkwardly sidestepped out of the frame, returning a few moments later wearing a shirt. Once he was fully clothed, the 1186th Ordinary Session of the Single Chamber commenced as though nothing out of the ordinary had just happened.

Both the video and screenshots of the shirtless judge quickly made the rounds on social media. This week, the court announced that it had looked into the incident and determined the whole thing was an honest mistake and de Souza hadn’t done anything wrong.

“The practice of carrying out judicial sessions by videoconference is a recent development,” the Amapá State Court of Justice said in a statement released Tuesday. “The occurrence of incidents such as what happened is perfectly understandable.”

It continued by trying to deflect some of the attention by, of course, blaming to media and suggesting that outlets trying to imply de Souza intentionally appeared bare-chested were spreading misinformation and “fake news.”

At least de Souza figured things out before one of the other judges had to tell him because that would’ve been really embarrassing.

Moral of the story: Wear clothes to work. Even when you’re working from home.

Related: 10 “shocking” gay Carnival images that Brazil’s homophobic president should tweet out to the world