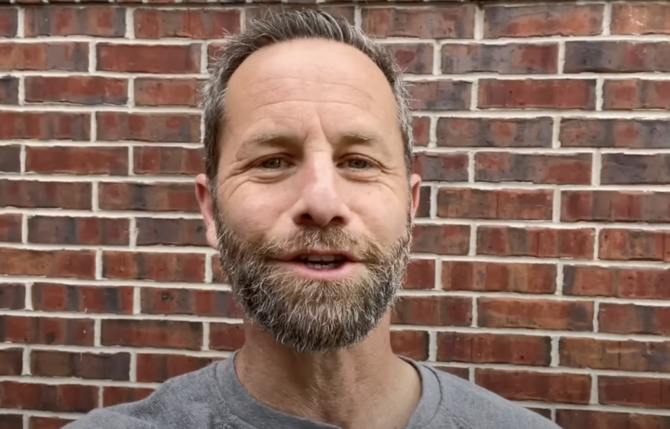 Extreme ring wingnut/actor Kirk Cameron is trending on Twitter this morning after ringing the alarm on public schools in America, which he says have become breeding grounds for dangerous liberal agendas, like critical race theory and gender ideology.

Cameron made the comments during to Fox News Digital while promoting his new propaganda film The Homeschool Awakening, which chronicles 17 homeschooling families who talk about the misconceptions and stereotypes they face.

“The problem is that [public school] systems have become so bad,” the 51-year-old said. “It’s sad to say they’re doing more for grooming, for sexual chaos and the progressive left than any real educating about the things that most of us want to teach our kids.”

Cameron, who hates LGBTQ people and believes homosexulity is “unnatural” and “destructive to so many of the foundations of civilization”, went on to talk about his own experience with home-schooling his six kids with his wife, Chelsea, and how they believe education shouldn’t be left to teachers, who he suggests are government pawns, without any input from parents.

“That’s just a fundamental difference in the way that we look at,” he said. “Who has been entrusted with the sacred responsibility of raising our children? Is it the parents or is it the government?”

But he didn’t stop there. Because he then proceeded to blast “those who are rotting out the minds and souls of America’s children” and said they were “spreading a terminal disease, not education.”

Actor Kirk Cameron continues to push his home schooling network. He says the public school system “is doing more grooming for leftist politics and sexual chaos, and racial confusion, than they are doing any real educating about truth, beauty and goodness.” pic.twitter.com/MQlwQ1KKVm

“And you can take your pick. Just go down the list. The things that are destroying the family, destroying the church, destroying love for our great country: critical race theory, teaching kids to pick their pronouns and decide whether they want to be a boy or a girl, The 1619 Project,” he said.

“If we send our children to Rome to be educated … we shouldn’t be surprised if they come back Romans,” he continued. “If we want them … to love God and love their neighbor and feel gratitude and thankful that they live in the United States of America, the freest country on earth, then you’ve got to teach them those things.”

Kirk Cameron says gay people are "unnatural" and "destructive" and that kids shouldn't be taught about slavery. Lauren Boebert was later seen scrawling "Mrs. Lauren Cameron" over and over again in her notebook and showed up at Kirk's house asking him to homeschool her

People who take education advice from Kirk Cameron are the same people who eat at Taco Bell and believe it’s real Mexican food.

Gee, I wonder if Kirk Cameron has a comment on the 200-page report about the nearly 400 Southern Baptist leaders, from youth pastors to top ministers, who have pleaded guilty or been convicted of sex crimes against more than 700 victims since 1998? #evangelicalpredators

Kirk Cameron is trending and you just know that dude's browser history is the stuff of nightmares.

Ever notice it’s the shittiest actors like Kirk Cameron, Kevin Sorbo, Scott Baio and Dean Cain who get wound up with conservatism and then blame Hollywood for them not getting parts?

Ah yes Kirk Cameron the problem with public schools is kids learning that racism is bad and gay people exist and definitely not kids getting shot on a regular basis.

Kirk Cameron is the Tucker Carlson of Scott Baios.

Kirk Cameron doesn’t want kids to go to public school so they can all become dumbass talibangelical losers like he is.

Why is it that people like Kevin Sorbo and Kirk Cameron are so concerned with other people‘s sex lives? Like unless those people are coming over to your house guys and trying to fuck them, live and let live and fuck off. Their obsession with peoples personal lives is demented.

Kirk Cameron always comes across like a bad actor playing a creepy youth pastor on a police procedural.

CONSERVATIVES: Quarantine is unnecessary and kids need to attend school IN PERSON for social development.

ALSO CONSERVATIVES: Kirk Cameron is right. Public School is the devil, keep your kids at home. You don’t want them turning gay.