When his defeat became apparent, in a show of magnanimity, Cawthorn congratulated his victorious opponent, State Senator Chuck Edwards, and encouraged Republicans to rally behind him.

It seems that magnanimity did not last long.

Cawthorn, whose one-term career as a representative was marked by controversy and scandal, was back on social media yesterday.

First, he posted a cryptic message stating: “The best is yet to come.”

The best is yet to come.

He followed this with a lengthy message thanking fellow far-right lawmakers and other so-called patriots who had supported him, even “when it was not politically profitable.” An accompanying image of names included Tucker Carlson, Steven Bannon, Marjorie Taylor Greene, Matt Gaetz, President Donald Trump, Rand Paul, Charlie Kirk, and the NRA, among others. 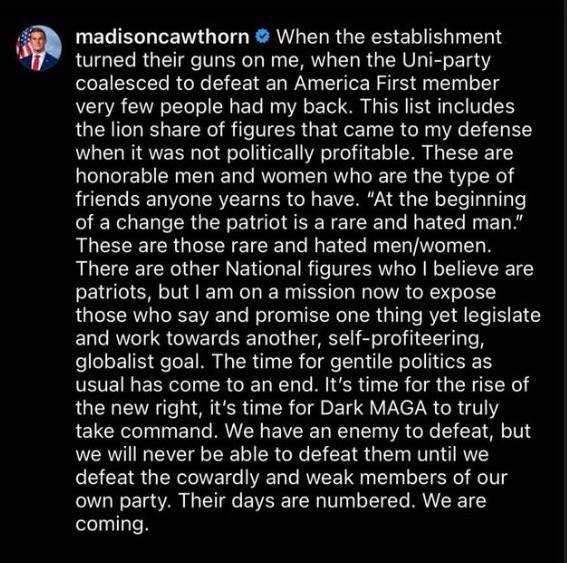 “These are honorable men and women who are the type of friends anyone yearns to have,” Cawthorn claimed.

“There are other National figures who I believe are patriots, but I am on a mission now to expose those who say and promise one thing yet legislate and work towards another, self-profiteering, globalist goal.

“The time for gentile politics as usual has come to an end. It’s time for the rise of the new right, it’s time for Dark MAGA to truly take command,” he continued, invoking the spirit of Darth Vader.

“We have an enemy to defeat, but we will never be able to defeat them until we defeat the cowardly and weak members of our own party. Their days are numbered. We are coming.”

Yes, Cawthorn did say the time for “gentile politics” was over, but it was a typo. He later edited it to say “genteel politics.”

Related: Madison Cawthorn claims the “establishment” are trying to kill his political career

His latest ramblings elicited a collective eye-roll from most online.

You’re gonna be lucky to get a job restocking the little tree air fresheners at a do-it-yourself car wash, tree puncher.
You’re a pariah in your own cult of a party. A feat particularly impressive given the fact that they let Boebert, Greene, Gaetz & Jordan stay.
You’re over.

All over your buddy’s face?

Some advice from a teacher:
Concentrate on becoming educated and maturing. Go to college. Get a degree. Do some volunteer work, mayber even in the disability community. Do something positive with your life. You’ve been given a do-over. Take advantage of it.

Hey, @TheJusticeDept . If you haven’t already looked into all of these “patriots,” here you go.

Ha! @mattgaetz deleted his tweet endorsing you the very second you lost.

Yet, you refuse to accept any personal responsibility for your loss. You’re not a victim here – you’re responsible. Own it

Chin up, there are plenty of opportunities out there for you. pic.twitter.com/ksHnsHJJWi

how can you be America First when you came in Second?