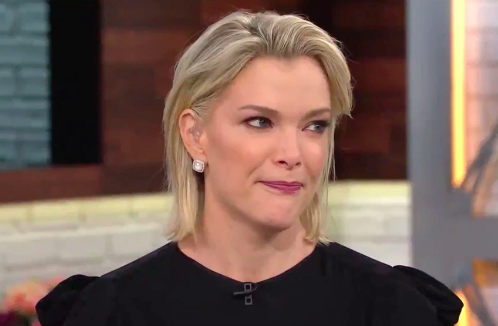 Well, it looks like karma may have finally caught up with FOX-News-anchor-turned-TODAY-show-host Megyn Kelly.

The 47-year-old is purportedly out of a job after comments she made about blackface on her show earlier this week.

“Given the circumstances, Megyn Kelly Today will be on tape the rest of the week,” an NBC News spokeswoman said Thursday morning.

It all started during round-table conversation on Tuesday morning’s show about Halloween costumers, when Kelly claimed that blackface was “OK when I was a kid as long as you were dressing like a character” and said she doubted whether blackface was actually racist.

A backlash ensued, prompting Kelly to issue a formal apology in writing as well as make an on-air apology the next day.

“I want to begin with two words: I’m sorry,” she said at the top of Wednesday morning’s show.

She went on to say “I have never been a PC kind of person” but that she learned from the backlash over her comments  that “it is not OK for (blackface) to be part of any costume, Halloween or otherwise.”

"I want to begin with two words, I'm sorry..The country feels so divided and I have no wish to add to that pain and offense. I believe this is a time for more understanding, more love, more sensitivity and honor..Thank you for listening and for helping me listen too." Megyn Kelly pic.twitter.com/6hHrvZLNvK

CNN reports that Kelly’s exit from the TODAY show is now a matter of when, not if, calling her firing “imminent.”

Kelly has also reportedly parted ways with her agency, CAA, and has hired a lawyer to help negotiate her departure from the show.

One key question: Whether she will stay with NBC News in some other role. She is scheduled to participate in the network’s midterm election night coverage in two weeks.

The decision to retain a lawyer may signal a lengthy battle over her contract, which is reportedly valued at $23 million a year. She is in the middle of the second year of a three year contract.