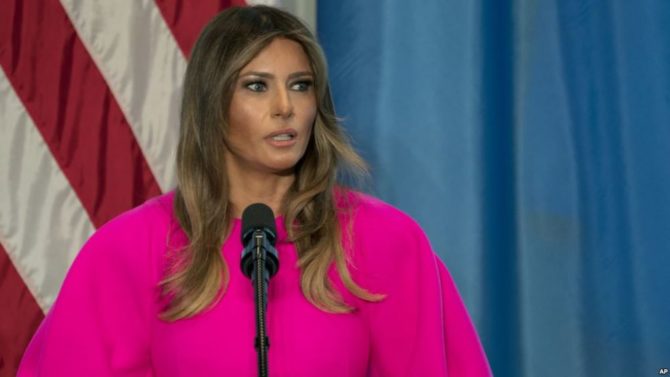 Just 24 hours after her husband stood before the United Nations and taunted Kim Jong-un, calling him “Rocket Man” and threatening to “totally destroy” every man, woman, child, animal, plant, and other living thing in North Korea, then denounced other world leaders, including, of course, Barrack Obama, first lady Melania Trump gave a robotic speech about bullying at a U.N. luncheon because, well, of course she did.

“We must remember that they are watching and listening,” the First Lady pleaded to her audience. “When we come together as parents, we claim responsibility to the next generation.”

She also encouraged everyone to “live by and honor the Golden Rule: do unto others as you would have them do unto you.”

“We must teach our children the values of empathy and communication that are at the core of kindness, mindfulness, integrity, and leadership which can only be taught be example,” she implored.

Related: The most #awkward moment caught on video between Donald and Melania yet

As you may recall, online bullying is, er, um, was supposed to be Melania’s cause as First Lady. At least, that’s what she said back in January shortly after the inauguration. The plan seemed to have ended before she moved into White House in June, but perhaps she’s revisiting it now? Who the hell knows?

Naturally, Twitter had lots to say about the speech. Take a look…

Melania's speech at the UN has to be a joke. HAS TO BE! She CANNOT be serious. Melanie, go home and give this speech to your HUSBAND!!!

Start with your husband pic.twitter.com/Lq3u2eGoic

Melania Trump is the MOST qualified person to give a speech on bullying. She's married to the biggest fucking bully on earth.

Melania Trump to give anti-bullying speech at The UN, right after the anti-sexual assault speech by Camille Cosby.

Do what Melania Trump says…not what her husband does.

So far, Melania Trump's war against online bullies has consisted only of this: pic.twitter.com/WSUME2L3cR