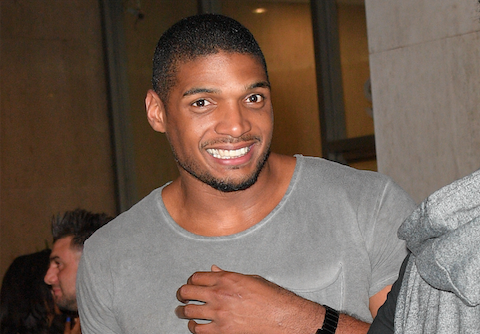 Former pro football player Michael Sam is ready for his next adventure.

Sam became the first openly gay athlete to be drafted by a professional sports team when he was picked up by the St. Louis Rams in 2014. It became a huge story, especially after ESPN broadcast him kissing his then-boyfriend, Vito Cammisano, when he learned he’d been drafted.

What followed for Sam was a meteoric rise to fame, high performance expectations, and ultimately, disappointment. He was cut by the Rams, then by the Cowboys, before he ever made it onto the field for regular season gameplay.

Speaking about the experience in 2017, he said: “I had to prove myself, to show that I was one of the guys. I was cut from the Rams, even though I was in the top five in sacks. Then I went to the Cowboys and had to do it all over again. And then I was cut there. I always felt like an outsider looking in.

“When I came out to the world on Feb. 9, 2014, I  got tons of emails from people telling me how they were condemned for their sexuality. It made me sad and angry. I spoke to one girl who told me that because I came out, she didn’t commit suicide. I was speechless.

“When I was drafted I thought the headline would be ‘NFL has first openly gay player,’ but instead it was ‘Sam kisses boyfriend.’ Should I have kissed a girl?

“The media made it a distraction. I’m still baffled. I thought it would be a story for two weeks and then it would go away.

“I tried to earn their trust, make them believe I belonged. Now I speak from the heart.”

Now he’ll be taking his talents to the sidelines as the new defensive line coach for the European Football League’s Barcelona Dragons.

“I hope to contribute however I can to help the defensive line to be the best pass rushers in the European league,” Sam said, per the team’s official statement.

Prior to his NFL rollercoaster ride, Sam earned All-American and SEC Defensive Player of the Year honors by recording 18 sacks in his senior year at the University of Missouri.

He announced his retirement from football in 2015 to focus on his mental health. Now 32-years-old, we hope this next chapter in his career is a touch down.