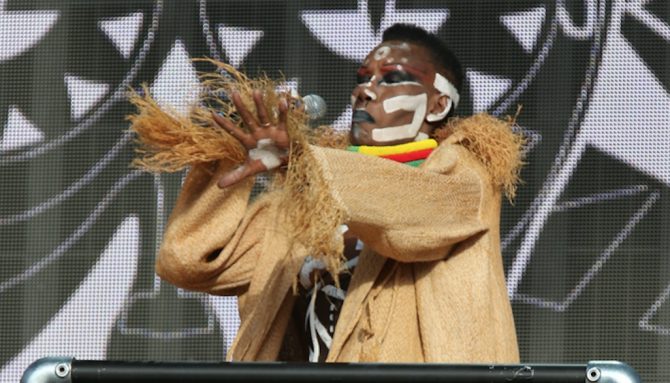 New York City is about to be hit with a hurricane.

But no need to board up the windows for this one. In fact, locals and visitors are strongly advised to go directly to the eye of this storm. Just wear comfortable shoes.

At the top of the bill is the “Hurricane” singer herself, the legendary Grace Jones.

Jones will take to the Pier 97 stage on Saturday, June 29, during NYC Pride, which also happens to be this year’s World Pride and the 50th anniversary of Stonewall.

That’s one seriously gay trifecta, not to mention pretty close to Tribeca.

“I couldn’t be more excited to perform in front of my LGBTI friends and the community that’s supported me for so many years during WorldPride 2019,” Jones said.

“Saturday’s Pride Island lineup will be a celebration of everything that the community stands for and will go down in illustrious history.”

“We’re thrilled to be able to create this multi-day experience, which speaks to an inclusive set of Pride-goers, during one of the biggest Pride events in the world,” said Chris Frederick, Managing Director of NYC Pride.

“With the iconic Grace Jones headlining on Saturday and the incredible list of curated talent, this musical experience is definitely not to be missed.”

Needless to say, the news lit up certain pockets of Gay Twitter:

I am seeing Grace Jones at Pride Island on Saturday omg

The speed with which I just purchased a ticket to Pride Island to see Grace Jones is just… whew. But I NEED to be in the presence of that woman even just once in my life.

Honestly who cares about Madonna, fucking GRACE JONES is performing the Saturday of pride???!!!!

And now, we leave you with this incredible feat of hula-hooping humanity: