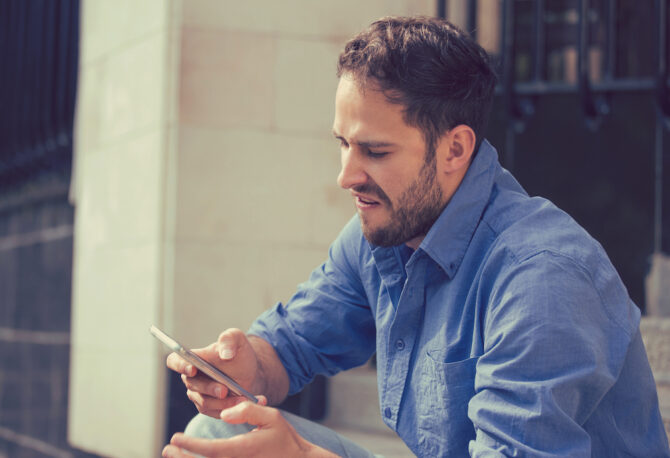 Swapping nudes can be an everyday practice for some in the Grindr set, but others aren’t comfortable sharing their NSFW pics with any old online connection. And one Reddit user told his fellow r/AskGayMen users that he feels guilty turning down requests for nudes.

“When a guy asks for your [dick pic] or nudes, but you don’t want to send those pics, do you apologize to him? I’ve always said, ‘Sorry, I can’t send you my dick pic/nudes because I don’t like sending my dick pic/nudes to random people.’”

When a commenter asked the original poster why he would apologize, the OP replied, “Because I feel guilty. I don’t know what’s wrong with me, but it’s hard for me to say no. That’s why I always apologize to them first whenever they ask me for my dick pics or nudes, and sometimes when I say no, they’d get mad and say some nasty stuff to me.”

(He also added, humorously, that some people ask if he’s Canadian because of his apologizing habit.)

We’re happy to report that commenters on the thread rose with one unified voice to say no, the OP doesn’t need to feel bad for apologizing—and he doesn’t even need to feel sorry in the first place.

“Stop apologizing for not wanting to send nudes to a stranger on the Internet,” one person wrote. “And if the guy gets mad, he has issues. That’s also a good thing because those people show you all of their red flags immediately, which makes it clear for you that you need to move on.”

Another person wrote, “Do not apologize for your boundaries ever. If he can’t respect that, he can take his trash-ass out.”

And a third commenter said that he just says “nah” to nude requests. “Or, depending on where we are in our chats/relationships, I might just not respond at all.”

One guy, meanwhile, told the OP to never apologize for not doing something he doesn’t feel comfortable doing. “‘I just don’t want to’ should be good enough and if it’s not good enough, then that person shouldn’t even be in your contacts,” he added.

Related: Unsolicited nudes are now against the law in Texas

And a more verbose commenter told the OP that there’s nothing wrong with him and that his reluctance is actually “very common.”

“People grow up with a lot of different beliefs about what they owe to others, and many people learn that saying no is something to apologize for—regardless of whether you owed them something or not,” that commenter wrote. “It’s a combination ofask vs. guess culture … and social anxiety/pressure.”

That commenter said that they, too, probably apologize too often. “It’s better than the alternative, but just try to be mindful of not letting people walk all over you,” they wrote. “People aren’t even conscious of it a lot of the time, but if your language says, ‘I think I owe you this,’ they’ll feel more comfortable pushing you for it. Pictures, sex, help, money—anything. Good luck out there, man!”

The OP seems to have heard the commenters loud and clear. In an update to his original post, he wrote, “Thank you everyone for your answers/responses! I really appreciate it!”