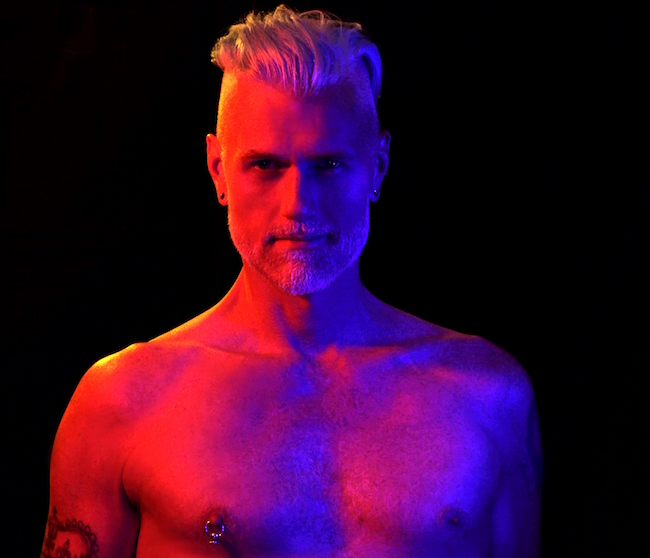 Familiar with New York-based musician Corey Tut? If not, you’re punishing yourself.

The self-professed “ex-bad boy punk rocker turned singer/songwriter” describes his music as a “cross between Trent Reznor and Jake Shears, with a dash of Thom Yorke and Justin Timberlake.”

A fixture on the queer New York club scene, Tut has been especially prolific lately, writing the soundtrack for Gerald McCullouch’s All Male, All Nude and releasing his latest full-length album, Sparks.

We caught up with Tut to talk about the state of queer culture, life in NYC in 2017, and what’s the future has in store.

So how did you get involved with All Male, All Nude?

I’ve known director Gerald McCullouch for years and previously worked on his films Daddy and The Moment After.

He mentioned he needed music for a new documentary, so I threw a bunch of new ideas together and send over. He cherrypicked what he thought would work best for the film.

Some songs were already finished; others were 20-30 second that I fleshed out enough for the film, and then fully for the Sparks album.

You said the project jumpstarted you creativity after a stagnant period. What what it about this particular subject matter?

I was stretching stylistically as a singer and songwriter, and broadening my sonic pallet as a producer, but not sure where I wanted to go.

I had always fancied myself a “serious” songwriter and hit a point where all my writing was feeling so heavy, especially after writing the anti-Trump Reality EP.  It was liberating just have some fun and write songs about sex, getting off, and going to the club.

I needed to blow off some steam and stop taking everything so seriously. It was getting exhausting.

It was also really fun to just write a few songs about dick.

How is life in New York City treating you nowadays?

I still enjoy living in New York City. I can’t see myself living anywhere else in the States at this point.

My lifestyle changed drastically when I got sober a few years ago. I don’t go out as much as I used to, especially since I retired from my DJ career.

With this record, I’m getting plugged back into the Brooklyn scene. I have to say, I’m finding this new crop of kids super-inspiring. They bring a real sense of fun and creativity back into the scene.

I played Will Sheridan’s “Hot Fruit” at Metropolitan a few weeks ago.  It reminded me of the old-school DIY weirdo let-your-freak-flag-fly vibe that you don’t see in Manhattan much anymore.

So, the Brooklyn scene aside, how are you jibing with queer culture as a whole right now?

Well, you can find whatever you want online. Do people meet in bars anymore to go home together? Is it all just Grindr and Scruff?

The Internet is a gift as far as connection and spreading ideas, especially for young queer kids. They can explore their self-expression in ways that wasn’t possible a few years ago.

Online, you can find exactly what you’re into — without even leaving your house.  I can only imagine what it’s like for kids stuck in the Midwest, who have Drag Race and access to queer culture on their phone 24/7.  It’s brilliant.

The flip-side of that is it’s easy to stay in your own little group, which causes a lot of infighting. We should be focused on the fact that the leader of our country represents a sizable faction of the population who want to see our rights stripped away.

What have you been listening to obsessively recently?

My favorite album last summer was Neon Romance by Boy Radio. I worked with him last year on some live stuff; he put out a brilliantly sexy soulful album in August that blew my mind.   A bit of a throwback to Prince-y electro funk, but modern at the same time.

Also:  Joywave from Rochester.  (They have an interesting take on the whole alt-rock thing). And I love Grimes, Lorde, Tov Lo, and the new Kesha album.  She’s always been underrated pop songwriter, in my opinion.

Any future projects you can talk about?

I’m working on a Christmas track with Peppermint and Thorgy Thor, finishing some new videos for Sparks, and planning a remix EP for Spring.

I did a show with Dezi 5 and Will Sheridan at Sunnyvale in October, and have another one coming up at Rock Bar on Nov. 17.

Lots of fun stuff on the horizon!