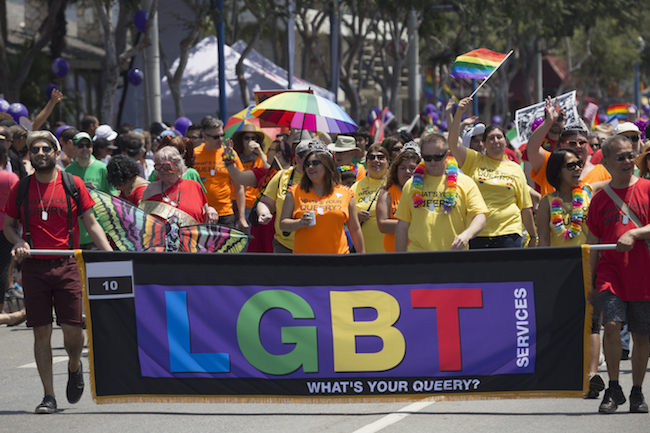 “We’re doing everything we can to make sure that the people who come to the city, sometimes only once or twice a year, are going to see something familiar [at the pride festival].”

That’s Christopher Street West board president Chris Classen, trying to assure folks at a Wednesday night community meeting that this year’s LA Pride in June will still provide a satisfying amount of entertainment, despite the major change in theme.

Bound to be much like the vast Women’s March that swept many American cities on January 21st, LA’s Resist march will kick off at Hollywood and Highland and follow a 3.1 mile path to La Brea Avenue, where it will then turn onto Santa Monica Boulevard and end at San Vicente at the entrance of the Pride festival.

Queerty spoke with one of the march’s organizers, activist and L.A. Police and Fire pension commissioner Brian Pendleton, shortly after Trump’s inauguration.

“I was seeing all the excitement around what was going on in Washington D.C. regarding their Gay Pride efforts,” he said. “And coming off of what the Women’s March did around the country, it seemed like a natural fit.”

So far, the march has received over 23K positive responses on Facebook.

The Pride Festival itself will still be a ticketed event (probably $20 each day), and it’s scheduled for Saturday and Sunday, June 10-11 in West Hollywood Park.

There’s also a free trans event and a sober area  on Friday June 9.

The annual Pride parade is expected to return in 2018.