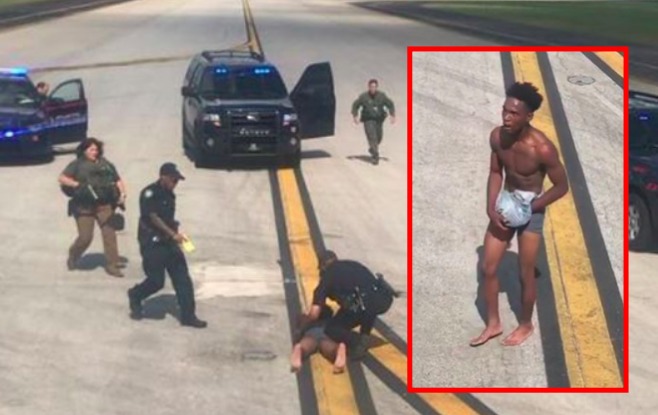 Passengers aboard a plane at the world’s busiest airport watched in horror as a naked man tried breaking onto their aircraft from the wing.

The incident happened at the Hartsfield-Jackson Atlanta International Airport around 4:30 p.m. Tuesday afternoon, according to the Atlanta Police Department.

19-year-old Jhryin Jones was arrested after police say he stripped down to his underpants, jumped a fence, ran onto a tarmac, climbed onto a plane’s wing, and pounded on its windows like a crazy person.

Local news station WSB-TV obtained recordings from the airport’s control tower during the incident, where confused airport officials can be heard describing the man’s bizarre behavior.

“He is tossing some stuff around,” an official says. “My guess is he has his clothes off and now he’s laying on pavement … Doing some pushups?”

Meanwhile, passengers aboard the plane, which had just arrived from Miami, began posting about it to social media:

#ItsTimeToFreakOutWhen a dude tries to board the plane from the outside after landing. #atlairport pic.twitter.com/AKLIn0FYrz

Meanwhile, the airport tweeted there was no impact on its operations:

The male who accessed the #ATL airfield is in Atlanta Police custody. APD is investigating the incident. There is no impact to #ATL Ops

Related: Passengers look on in disgust as living embodiment of toxic masculinity tries to exit plane