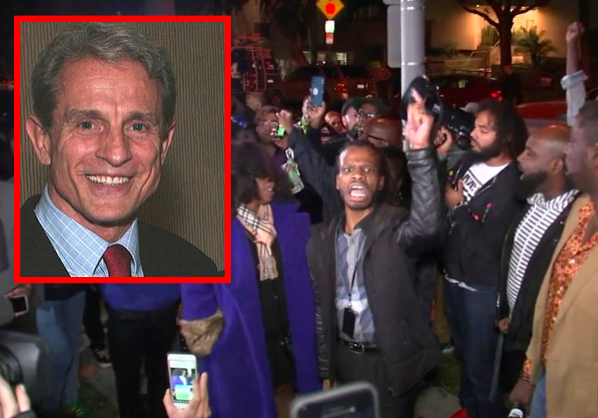 Yesterday, Wehoville reported that in the early hours of Monday morning, the body of an African American man was wheeled out on a gurney from Buck’s home on Laurel Avenue.

The identity of the man has not yet been released, but it was a chilling repeat of a similar incident that happened in July 2017 when Buck was investigated following the death of another black man, 26-year-old Gemmel Moore.

Moore’s body was found naked on a mattress in Buck’s living room. According to a coroner’s report, he was surrounded by drug paraphernalia.

The L.A. District Attorney declined to file any charges against Buck, however, citing “insufficient evidence.”

Yesterday, the Los Angeles County Sheriff’s Department’s homicide bureau began an investigation into the death of another man—who is said to have been a black man in his fifties. They said they are also conducting a “secondary review” of Moore’s death. Last July, the district attorney’s office declined to file charges in the Moore case, citing insufficient evidence.

Community activist Jasmyne Cannick organized last night’s protest. During a fiery speech, she accused the DA and LAPD of having “blood on their hands” for failing to investigate Buck after the first incident.

“This man has had two dead bodies in his house!” she told the crowd, who responded by chanting “Arrest him now” and “Black lives matter” as police monitored the situation from across the street.

Others shouts from the protest included “It’s a death chamber,” “This is a cemetery,” and “Black boys are dying here, nothing’s happening!”

According to neighbors, Buck was staying with friends, although a light was burning in his apartment.

At one point, Cannick told someone entering into the building, “If you see a black person going into this apartment, tell them ‘Don’t go in there. You’re going to die.’”

“You see somebody black going up there, you need to come outside and say ‘Don’t do it, don’t go up there.’ Because this is literally like a real life Get Out movie. Somebody’s got to warn them.”

A woman who claims to have seen the latest victim enter the building shortly after midnight on Monday morning tells Daily Beast she had a bad feeling the moment she saw him.

“I knew where he was going, based on that I’ve lived here for very long and I know what goes on there,” she recalls. “I looked at him because I felt bad, because I was here the last time this happened.”

The woman, who says she’s known Buck for 30 years, says the man “seemed completely fine” when he was buzzed in.

“When I woke up this morning and I came out and I saw the news trucks, I actually thought it was Buck [who died],” she continues. “They said, no the guy that who went in, I thought ‘Jesus Christ I saw him go in.’ I was horrified and really saddened and disgusted.”

Police were called to Buck’s home just after 1 a.m. on Monday morning, about 45 minutes after the woman claims to have seen the man enter the building.

The man was pronounced dead at the scene. The cause of death remains unknown. Buck has not been arrested, although LAPD says it’s reopening the investigation into Moore’s death in light of these recent events.