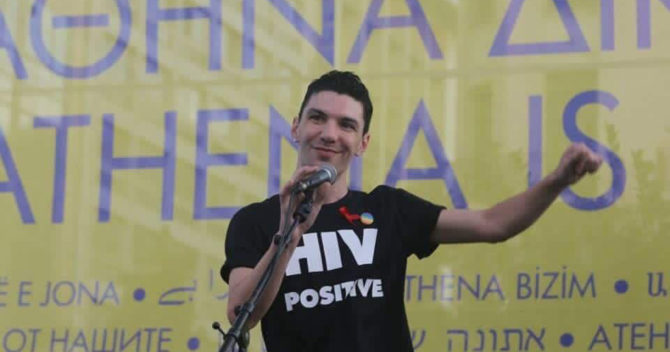 Media outlets in Greece are reporting that an LGBTQ activist and drag performer has died as the result of an accident after attempting to rob a jewelry store, but a disturbing video of the event tells a very different story.

Zak Kostopoulos, who was a prominent fixture in the Athens queer scene, is seen in the tape being kicked to death by two men as a crowd watches.

A social media campaign is pushing back against the official “accident” story. One activist wrote:

“His murder is all over the news presented as an accident: he died trying to escape through a shop window after attempting armed robbery. The brutal, brutal video accompanying those articles shows a very different truth: a disoriented, unarmed Zak trying to escape and the shop owner with another man brutally kicking him to death.”

Others have been quick to point out that Kostopoulos was not in the store to rob it, but rather to seek shelter from a fight happening out on the street. He reportedly got caught in the shop’s security door when it closed.

In the upsetting video that’s circulating online, Kostopoulos stumbles while attempting to crawl out of the shop window after shattering it with a fire extinguisher. That’s when the shop owner chases him and brutally beats him with another man. Police eventually arrive and cuff Kostopoulos.

He reportedly died in the ambulance while being transported to a hospital.

The shop owner has been arrested, and the second man is wanted in connection to the senseless death.

Kostopoulos was a well-known drag performer (known as Zackie Oh) and HIV activist, regularly speaking out to combat stigma.