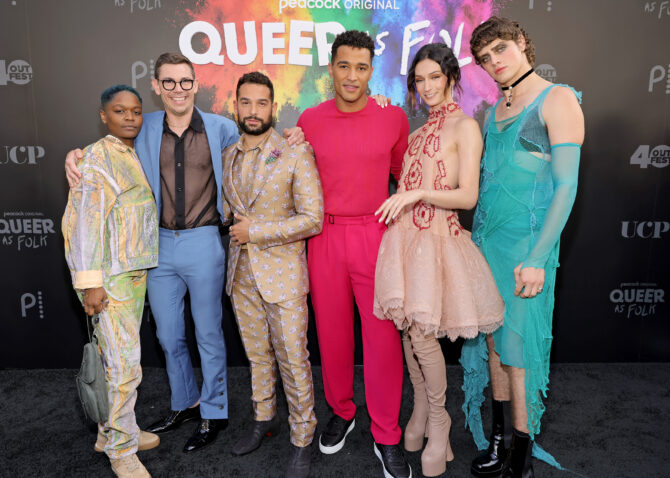 Ambitious, inspiring, and defiantly gay, the latest iteration of Queer As Folk—now available to stream on Peacock—finally lives up to its title.

With all due respect to Russell T. Davies’ groundbreaking, turn-of-the-millennium TV drama and its American counterpart of the same name, this reboot, of sorts, depicts a queerness more in line with our modern understanding of the word. Where those past iterations largely centered on cis, white, gay men, the new Queer As Folk focuses on a much more diverse cross-section of the LGBTQ community, particularly a group of friends in present-day New Orleans who are brought closer together in the wake of an all-too-common tragedy.

In other words, the folks in question—this time around—are authentically queer, and the series is all the better because of it.

But what does it mean to be “queer as folk?” The title is derived from an old English proverb, “there’s nowt so queer as folk,” which essentially suggests “nothing is as strange as people can be.” Of course, the original phrase has long fallen out of fashion, but it’s remained in the zeitgeist thanks to the series and taken on a life of its own.

In that spirit, with the opportunity to cover Queer As Folk‘s red carpet premiere in Los Angeles, Queerty decided to pose that question to the stars in attendance: What does the phrase “queer as folk” mean to you? Unsurprisingly, responses ran the gamut from the hilariously confused to the deeply thoughtful. Below, you’ll find thought-provoking and head-scratching answers from the show’s cast, creatives, and other famous fans—as well as a few of our exclusive snapshots from the carpet.

I believe it comes from a British phrase that just means “they’re not like other people.” And it wasn’t necessarily associated with the queer community. It’s sort of an old phrase, but I think it was co-opted by the queer community, or reclaimed. Because, obviously, a lot of queer people used to be called that word in a derogatory way. So it’s this reclamation, it’s saying, “Yeah, maybe we are different, but we’re gonna shout it from the rooftops! We’re queer as folk!” And, obviously it’s a pun. We all knew that, right?

It’s being every version of gay, queer—whichever words you want to use—being that “as f*ck,” you know what I mean? That’s a funny question, because I can’t just repeat it back to you. [Laughs.] But, honestly, it means not limiting yourself to what that can even means. It means expanding yourself to what that feels like—to be “as f*ck” of something. To be morphed as f*ck, to be groovy as f*ck, to be multiplied and in a multiplicity and in a wholeness as f*ck, and to be accepting all of those things at once.

“Queer as folk” means to me that we are everywhere, and that we are in the fabric of everyone’s lives. Even when you are not for us, we are with you. You know what I mean? I don’t want to sound like we’re the Boogeyman, but we’re under the bed, and you either contend with us or deal with us, but we’re not going anywhere!

What I love about the title is that it’s a play on a phrase that was popular in the UK—one that I didn’t know anything about until I Googled it, like, “What the hell does this actually mean?” [Laughs.] But if you really break it down, it’s calling back to the old use of the word queer: Kind of odd, kind of strange. Like, “Oh, how odd people are, how odd folks are, how funny this whole predicament is.” It makes me think of how gender and sexuality and perception of ourselves—none of this is real, and the more you can know yourself, the more you can project that out onto the world. It’s like, what an odd thing to have to get to know yourself! How bizarre that we get to share space and time now and have to define it with labels—or un-define it with labels.

Well, obviously, Queer As Folk is meant to be a play on “queer as f*ck.” But, really, it’s just about being unapologetically “us.” The show does no real work trying to explain the intricacies and subtleties of queer day-to-day life. We’re not here to teach people like, “Oh, this is what a queer morning looks like on a Tuesday!” It’s messy queer stories, lovely queer stories, and everything in between. So it’s just means something that is unapologetically and unabashedly “us.”

I remember watching the US version, like renting it at Blockbuster Video, incognito, you know, “for the storylines” and then just masturbating furiously for days on end. [Laughs.] But it was groundbreaking at a time. And I think, 23 years later, what it means to be queer has completely changed. And, you know, my gay, disabled *ss at 12 could never have even fathomed being in a—well, first of all, I wouldn’t know what a reboot is. [Laughs.] But to know that I’d be in a new iteration of Queer As Folk, it would’ve been huge! My 12 year-old self would think, “Wow, actually maybe this means things aren’t going to be so bad after all.” So it’s really meaningful to be a part of this project and everything Queer As Folk encompasses.

So, I interpret like “queer as folk” as being as queer as “you,” you know? As simply the individual—that’s what all folks are, they’re just like the everyday person. And so our show is showing people as they are, where they are in their queerness. It’s not a measure, it’s more like an open gate for people to come in, knowing they’re welcome wherever they are in their journey.

It means the word that’s hinted at, sure, but that said, it’s a defiant queerness. It’s an unapologetic queerness and a non-assimilationist queerness. Queerness that says that we are okay and good and worthy of love no matter how messy and complicated. And, look, queer and folks—I don’t know anybody who’s not messy and complicated! But certainly we are here, and capturing that is a really special thing.

Twenty years apart, the word means something very different to me now. I was actually very uncomfortable with it growing up because I grew up in Newfoundland, and the word “queer” was more synonymous with strange or odd—but in a derogatory way, like it was often something that I felt like was thrown at me rather than embraced by me. And I’m really thrilled that it has changed so much lately, because it now is a word that I think is really all-encompassing, and embracing, and is maybe even a little overused, in all honesty? But I think the point of it is inclusion and expansion.

It’s that double entendre! You know, we’re “folk,” meaning being a community of people, and we’re “queer” in the idea of just being one’s authentic, unique self. And I believe the original term of “queer as folk” is reflective of that. I looked it up at one point, and I barely remember, but it’s a phrase used predominantly in England, which is originally where the show was from, so it’s not something that’s usually in our American vernacular.

I think it’s just about being very much unapologetically queer. And that sounds a little cliche, especially during Pride Month when all these brands are like, “We’re unapologetically queer,” [laughs,] but it does feel like that. I think, so often, queer people and women are just put into this box where we’re supposed to be small, whereas I just don’t know if straight men are ever given those [limitations]. Like, we’re not allowed to be big and loud, or maybe dramatic and over the top. So I feel like the title of the show is about, like, “no, this actually might be in your face, and we want it to be!” We’re not going to be smaller to make you feel more comfortable.

I have this same question all the time! How are we meant to say it? Could it be “queer *ss folk”? Because, I mean, these are queer-*ss folks! [Laughs.] So I actually think the title is just missing an “s.”

When the original Queer As Folk came out, I was a senior in high school. I had been queer-identifying for many years at that point—I was not one of the queer people who could hide that much, and I paid the price for that in many ways. But I was surprised at how little diversity there was on the show at the time. And knowing the difference between a queer identity and a gay identity as well, I was always like, ‘Why isn’t this called ‘Gay As Folk’?” [Laughs.] “Why do they have to sue the word ‘queer’?” Because the core theory around queerness—sexuality notwithstanding—is that it’s a radical framework for seeing the world. And I thought the first iteration of that [show] failed in many ways, and I was excited that the new version was able to more effectively encapsulate a true multiplicity of queer identities.

To me, it means that we’re all a little queer! And queer is the future, so it’s all about us finding that, being okay with that, and letting it shine through. And I think the show is that—it’s like, “we the folk, we the people.” We are all the people, and we’re all queer, so we just got to get into it!

“Queer As Folk” is derived from, like, a British saying, maybe? Right? But, girl, I don’t know—there better not be a written exam after this. But I think it’s like “folk” are the Joneses, right? Keeping up with the Joneses. Girl, I don’t know, I don’t do science. [Laughs.]

To me, it means celebrating diversity—it’s obviously Pride Month! But t’s such an amazing show that showcases people from the entire LGBTQ+community. And it’s really important to celebrate those voices because we don’t see that enough on TV and film. But Peacock has such an amazing platform for it, where it’s all celebrated.

There’s the obvious: “F*ck.” [Laughs.]  But, you know, honestly though—if you want to go deep into it—it can be seen as an early acknowledgement of gender specificity. “Folks,” I think, is a way to acknowledge that queerness is not relegated to a single gender or in the binary. Obviously, again, there is the low-hanging fruit of the “f-word,” but I do think there is value in it being a very open-ended, open-gender or non-gendered term.

Cheyenne: Wow, I’ve never thought about that before! Honey, any ideas?

Jason: When I think of the word folk, I think of family, I think how we’re all have the same tribe.

Cheyenne: Ooh, he’s getting it! [Laughs.]

All episodes of Queer As Folk are streaming now, exclusively on Peacock. You can’t watch the trailer below.