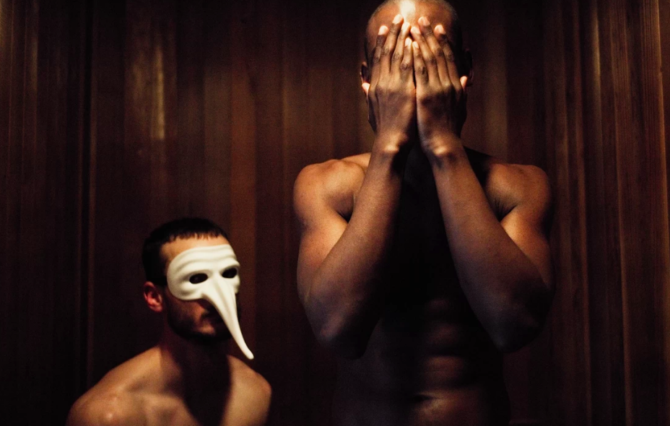 “Toby always used natural lighting. The films felt real, and the men in them looked like they were actually having fun. They’re beautiful films.”

So, for his 40th birthday, that’s what Dolgin did. He wrote a script and, while his parents were away one weekend, used their house (without telling them) to film the project.

Here’s a description of the film, according to Vice:

Brownies are brought over as a tasty gift, and then the two engage in a game of chess. Soon after, they have invigorating sex in front of the fireplace. But there are also forays into the fantastical: The Housesitter features a dream sequence, in which Wilson and Braun meet up in the snow wearing outrageous masks. The dream sequence, notably, features snow shoes, so is true Canadiana—a cross between an NFB documentary and a David Lynch movie.

He adds, “I don’t think of this as a mid-life crisis movie, I see it as a mid-life celebration. I love sex and I love great photography and film, so this is a combination of the two.”

Watch the NSFW-ish trailer for The Housesitter HERE.