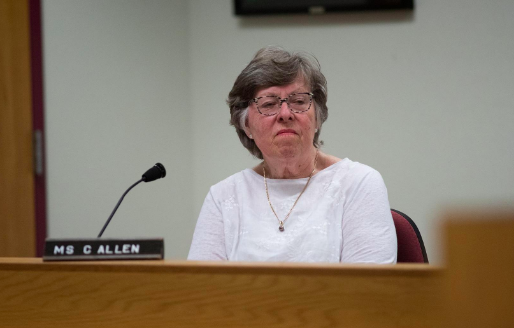 A school board official from East Pennsylvania has abruptly resigned from her post after becoming a political lightning rod for her views on LGBTQ bullying.

Carol Allen is a retired teacher who hates iPads and doesn’t seem to think bullying is a problem for gay youth, despite all evidence to the contrary. She was elected to the school board in 2015.

Ken, This is to inform you that I am resigning from the East Penn School Board effective immediately. Carol Allen.

Earlier this year, Allen sparked an outrage when she voiced her opposition to a local high school’s anti-bullying campaign.

It all started when students at Emmaus High School were shown a series of short #ProudToLove videos during morning announcements back in April. The videos were selected by the school’s Gay Straight Alliance.

Here’s one of them:

Allen thought so. She let her feelings be known at a school board meeting in June, claiming the videos violated parental rights. She also got local Tea Party officials and members of the antigay American Family Association to join her in voicing their disapproval.

During the public comment section of the meeting, one of Allen’s guests shouted an antigay slur at a teenager from the back of the room.

Ultimately, however, Allen and her fellow deplorables were vastly outnumbered by people in favor of the videos and the school’s approach to supporting its LGBTQ students. And so, last week, she resigned. Presumably, in protest.

But this wasn’t the first time Allen has taken issue with how the school district handles bullying.

In October 2017, she tried to block an anonymous survey that would track students’ attitudes about bullying, again citing parental rights.

“Parents do not know what their children are answering in survey questions,” she said.

Yeah, that’s kinda sorta the point of an “anonymous survey”. Allen’s attempts to block it were unsuccessful.

Ironically, in July 2017, she caused a huge stink when she said she “felt bullied” by colleagues after they didn’t invite her to visit with kids during a summer school session.

“I was very surprised because we talk about bullying all the time for years and years and years,” Allen said. “And I really felt bullied by the superintendent.”