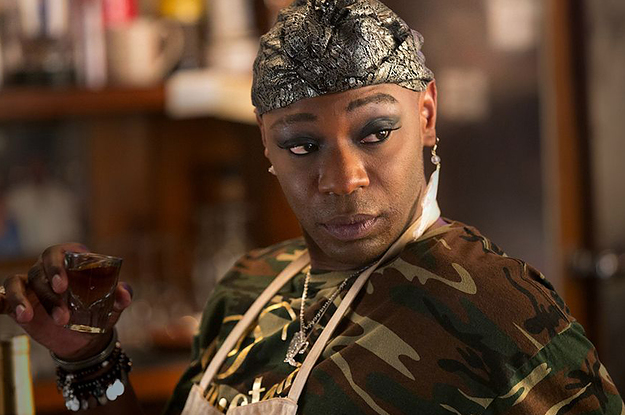 News of actor Nelsan Ellis’ death continues to shock fans as the information spreads, and we thought it’d be a good idea to look at two ways in which the acclaimed performer stood up for queer lives, both on the True Blood set and off it.

First, here’s a highly memorable scene in which Ellis’ character, Lafayette, confronts some homophobic diners who are angry their food has been prepared by a gay man:

And back in 2014, the NY Daily News reported on this behind-the-scenes True Blood drama:

Nelsan Ellis will miss his character Lafayette when the hit drama “True Blood” wraps up this season – but he won’t miss one former fellow cast member.

The actor didn’t hold back in a Vulture interview when asked for his thoughts about former “True Blood” actor Luke Grimes. Prior to the show’s seventh and final season, Grimes quit the series, with Buzzfeed reporting that he didn’t feel comfortable with his character James having a romantic relationship with Lafayette.

But Ellis wasn’t done. He said that he couldn’t understand Grimes’ concerns portraying a same-sex romance, especially since the LGBT-friendly drama is famous for its risque sex scenes.

“First of all, this show, it’s ‘True Blood,’ and s–t, we get scared when we read scripts!” he said. “When scripts come, we’re like, ‘What are they going to have us do this week?’”

“I can’t approach a character with judgment,” he continued. “I certainly can’t tell my boss, ‘I can act what I want to act, but not what you tell me to act,’ especially on a show where you come in, knowing what it is.”