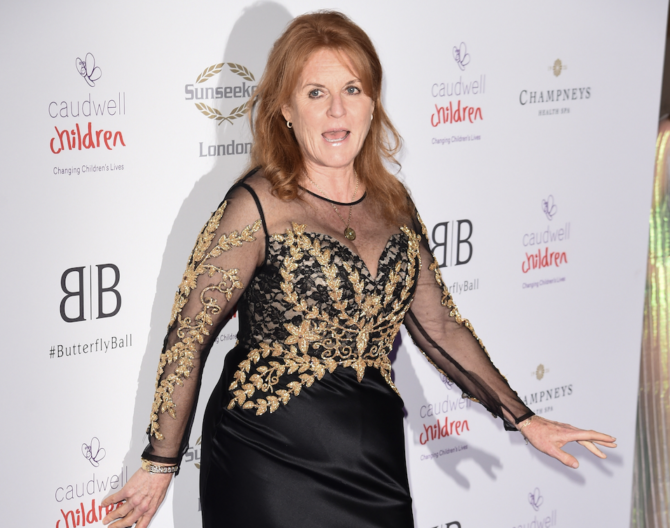 We don’t hear too much from Sarah “Fergie” Ferguson, the Duchess of York and ex-wife of Jeffrey Epstien’s BFF Prince Andrew. But she’s trending on Twitter this morning for ridiculous comments she made to the French magazine Madame Figaro.

According to Fergie, she is the “most persecuted” woman in the history of the royal family. More persecuted than the beloved Princess Diana, who queer actress Kristen Stewart plays in the new film Spencer, and Queen Anne Boleyn, who was beheaded by King Henry VIII. Oh, and Mary, Queen of Scots, who was imprisoned in Loch Leven Castle before having her head cut off by Queen Elizabeth I. And let’s not forget about Meghan Markle, who was literally driven out of the country by her racist in-laws.

“I was maybe the most persecuted woman in the history of the royal family,” Fergie told the magazine, “but I’m still here. The bruised reed that doesn’t break is in my DNA.”

In the interview, Fergie also confessed that she still loves her ex-husband and stands by him, even as he faces sexual assault accusations made by Victoria Giuffre, who says he raped her at the London home of Epstein’s pal, Ghislaine Maxwell, and abused her at Epstein’s homes in Manhattan and the U.S. Virgin Islands when she was 17.

Prince Andrew has “unequivocally” denied the allegations. And Fergie, who still shares a home with him despite no longer being married, believes every word he says, even after he repeatedly cheated on her during their marriage. In October, Scotland Yard announced it would not pursue Giuffre’s case.

“I loved him and I still love him today,” Fergie said. “I will stay by his side, because I believe in him, it is a good man.”

Here’s what people on Twitter are saying about her remarks…

Can Fergie read the room? Diana died being persecuted, meanwhile she's still living with Andrew, off taxpayers money, without anyone telling her a peep!

Fergie: “I’m the most persecuted woman in Royal History”

Mary Queen of Scots: “Hold my beer … and my head” pic.twitter.com/Hvr8juyfnd

Fergie should know if you're ever a member of the royal family and mess up they don't forget. Look how they treated Diana and all she was doing was standing up to her cheating rotten husband.

There is only ONE Fergie I am acknowledging from this point on. #Fergalious pic.twitter.com/MEK7KjXaAl

Fergie is on defense worried about that loan she took from Epstein.

Diana, Fergie, Megan… The Royal family have a problem with women… https://t.co/a1UCP7Nxjr

Fergie talking about she's the "most persecuted woman in royal history" yet she still has her head. Curious.

Fergie: “I’m the most persecuted woman in royal history.”

I think this is the first time in decades I’ve remembered that she exists.

Watch the cast of the current hit Broadway show “Six”, which reimagines the six wives of Henry VIII as pop divas, perform in the video below.