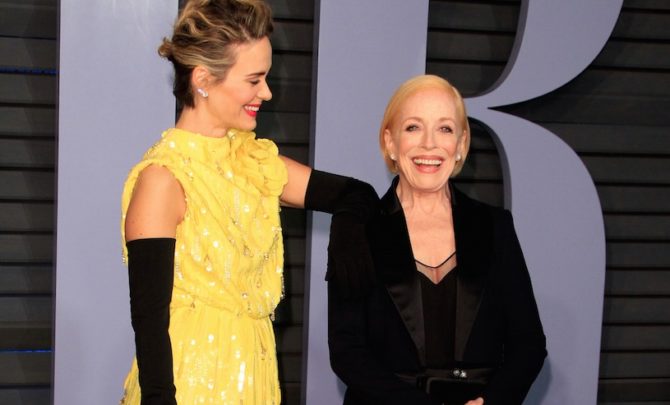 That’s the amount of time and f*cks Sarah Paulson is willing to give to anyone who has a negative opinion of her May-December romance with fellow actress, Holland Taylor.

And it’s precisely the proper amount.

Speaking to Modern Luxury (oh-la-la), Paulson, 43, expressed just how unbothered she is about her relationship with Taylor, 75.

“If anyone wants to spend any time thinking I’m strange for loving the most spectacular person on the planet, then that’s their problem. I’m doing just fine,” Paulson said.

No filter @emmaroberts ??and my love #holland taylor

Paulson also explained how the two met, hit it off, and took a ride down the tunnel of love.

The Emmy award-winning American Horror Story actress attended a dinner party a decade ago, where Taylor was present.

Despite Taylor being there with her then-partner, Paulson thought she was “probably the most exquisitely beautiful woman I’d ever seen.”

It wasn’t until years later that they bumped into one another again, followed one another on Twitter, kicked off the flirtatious DMs, yadda yadda, here we are.

Sarah previously spoke to The Edit about how she chooses to live her life:

“My life choices are, um, unconventional. I’m with a much older person and people find that totally fascinating and odd, and, to me, it’s the least interesting thing about me.”

“But I do feel a bit unconventional. I am a woman of a certain age who chose not to have children, and who has made my career my priority. I am the captain of my own ship, and I’ve never looked to anyone else to validate that, or tell me it’s okay.”