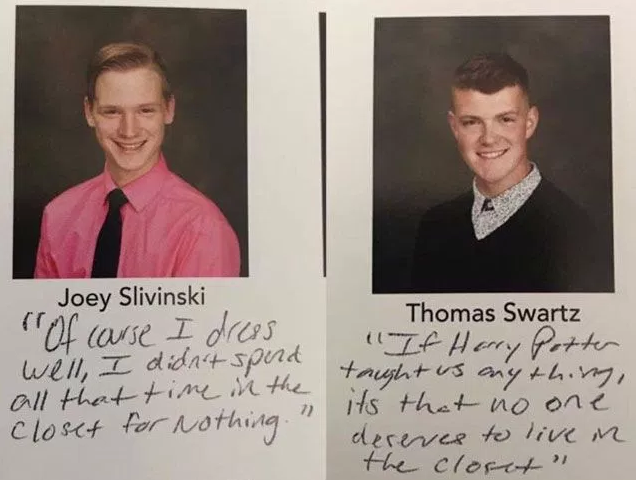 Two students from Kearney High School in Kearney, Missouri had their personal quotes about being out of the closet scrubbed from the school yearbook without warning, local news station KCTV reports.

In his yearbook quote, Joey Slivinski originally wrote: “Of course I dress well. I didn’t spend all that time in the closet for nothing.”

Thomas Swartz’s had a similar sentiment: “If Harry Potter taught us anything, it’s that no one should have to live in the closet.”

Apparently school officials didn’t think so. Both young men were disappointed when they opened their yearbooks and saw their quotes mysteriously missing.

“I went to find my quote in the yearbook but, nothing was there,” Joey said.

“It was a blank picture under my name,” Thomas added.

In a letter, the school’s principal, Dave Schwarzenbach, and the superintendent of schools, Dr. Bill Nicely, said the quotes were removed for being “potentially offensive,” but, in hindsight, they realized censoring the gay teens probably wasn’t the best idea:

District administrators were made aware of concerns regarding the removal of senior quotes from the school yearbook. Each year, graduating seniors are provided an opportunity to pick a favorite quote to be placed in the yearbook. In an effort to protect our students, quotes that could potentially offend another student or groups of students are not published. It is the school’s practice to err on the side of caution. Doing so in this case had the unintentional consequence of offending the very students the practice was designed to protect. We sincerely apologize to those students. All KSD staff understand the importance of inclusion and acceptance especially in an educational setting. We work diligently to help every student feel safe, supported, and included. District staff participate in ongoing training around issues of diversity and support student organizations that do the same. That being said, we acknowledge our mistake and will use it as a learning opportunity to improve in the future.

Both young men say they plan to print stickers with their quotes on them and hand them out to students to place in their yearbooks.