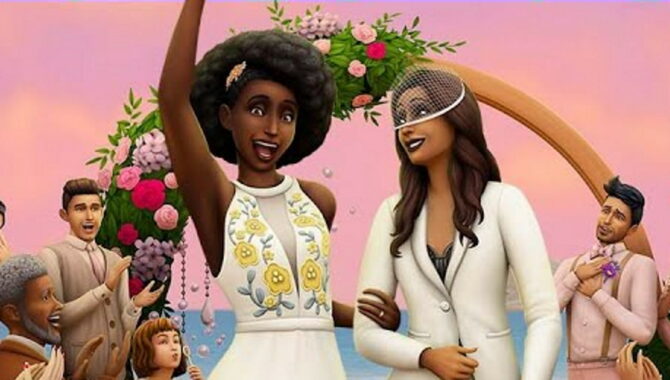 Since its initial release in 2000, The Sims has been a pioneer for queer inclusivity. In a time when it was rare to see even a passing reference to anything gay in video games, The Sims gave players same-sex romance options—something that wouldn’t become commonplace until over a decade later.

But as progressive as this was for its time, there was always one romantic element the game left out: weddings. In the beginning, same-sex sims could get into relationships and live together, but it wasn’t until The Sims 3 that they could exchange simlish vows of matrimony like their straight counterparts.

Years later, The Sims 4 has proven to be the most inclusive installment yet. Now players have much more freedom of gender identity and expression, like making decisions on whether a Sim can get pregnant and how they use the restroom. Although The Sims 4 launched in 2014, it has since released a number of updates that expand these options—a recent one will finally provide players with customizable pronouns. And the game’s latest expansion, My Wedding Stories, promises to make weddings the heart of the experience.

Related: The 10 best queer games available on the Nintendo Switch

With My Wedding Stories, players can live out their utmost bridezilla fantasies, controlling everything from the venue to the flower arrangements to the guest list to the cake design. Players can also plan wedding-adjacent events like the bachelor(ette) party, the rehearsal dinner, honeymoon, and even the renewal of vows. In the spirit of complete customization, all of these events are optional—sims can tie the knot in a courthouse if players so choose.

As much as The Sims has striven for inclusivity over the years, there has always been room to grow, a fact which the developers have repeatedly shown a willingness to address. And so far, My Wedding Stories is looking to be another solid improvement on the tools players are given to craft their own queer stories.

Be on the lookout for The Sims 4: My Wedding Stories when it releases worldwide on February 23rd.